I made a bra! In fact I've made TWO bras!


Bras are all the rage on the sewing blogs right now.  And with every one I saw, I just thought “That’s too hard, too fiddly, and you need all these little bits!”.  Also I was kind of embarrassed?  But now I realise “WOMEN WEAR BRAS!  STOP BEING DUMB!"
Then my wonderful Mum saw an ad in the paper for a one-day bra-making workshop.
I gathered up three friends and we applied.  Materials and kits were to be provided, we just needed our machine.
And this is what I made! 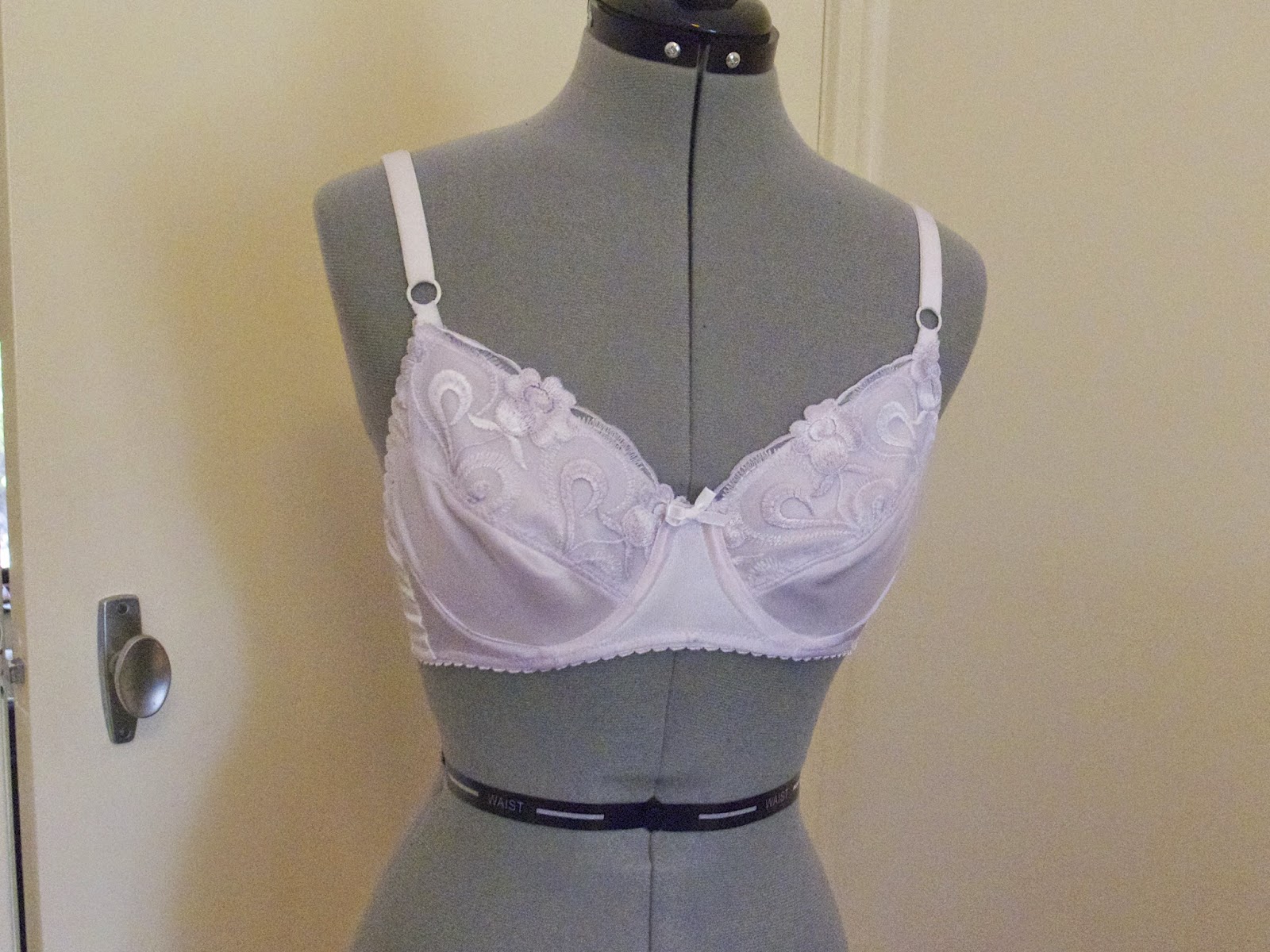 On my dressform, because, you know.  Unfortunately it doesn’t fit the dressform all that well, because she doesn’t actually have boobs - she has boob loaf.  She's also not squishy like a human.  However, I am pleased to report that it fits ME perfectly and I’ve hardly worn anything else!
The pattern is THIS ONE, from an Australian company that is hilariously named Booby Traps.  It’s a soft-cup bra, no padding or moulded cups.  I know the pattern photo is pretty dreadful - why didn’t they make sure the bra was fitting the model properly?  But it’s a great pattern that worked really well for me and all my friends.  It looks pretty similar to the Malborough bra Lauren of Lladybird made HERE. 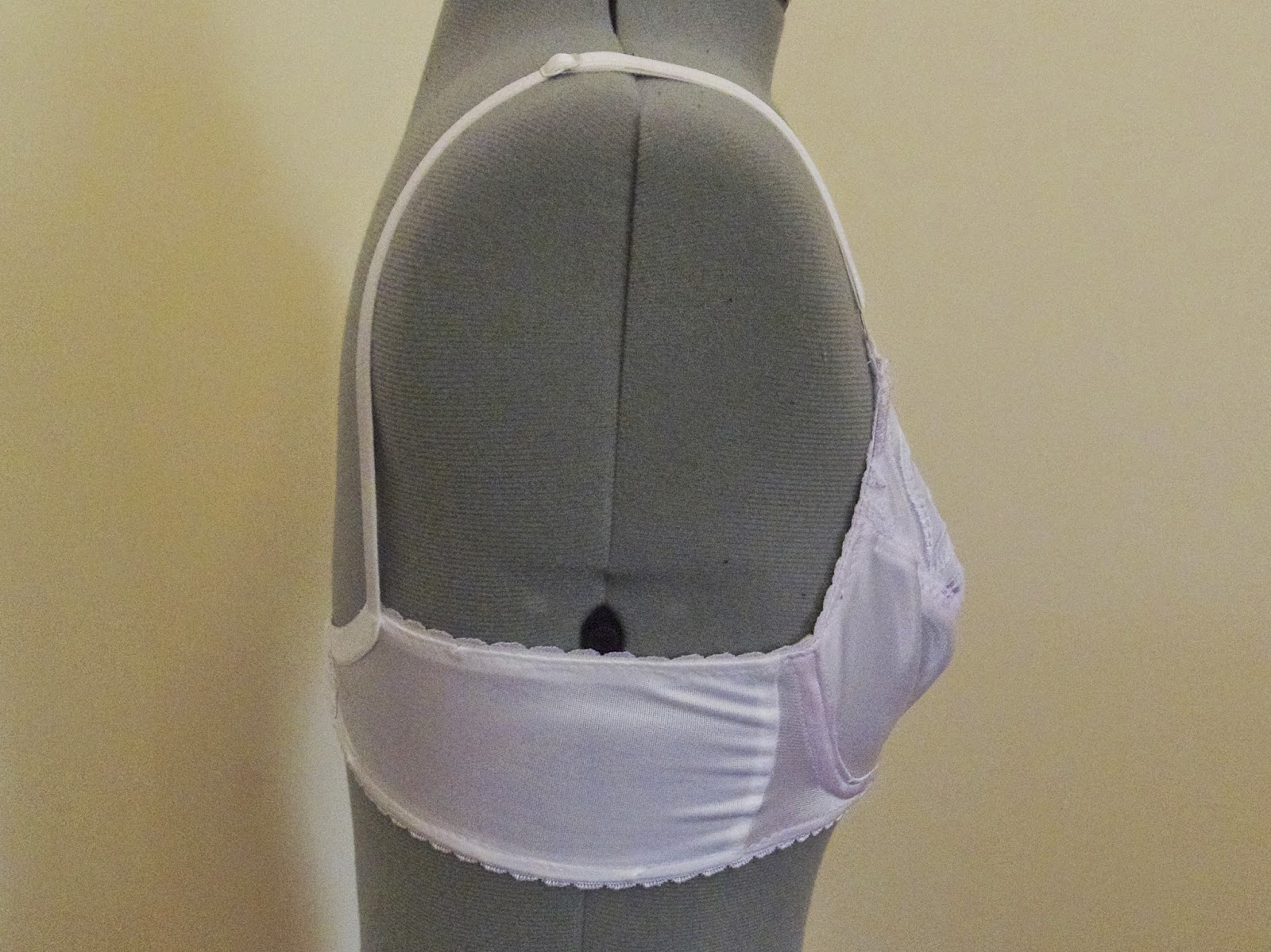 I made a size 10B which is my usual size in the shops.  The fabrics are tricot, lace, and some thick elastic fabric I forget the name of.  The lace is just decoration and was tacked onto the tricot before construction. Other materials are two rings, two sliders, underwires, a casing for the  underwires, strapping, elastic for the bottom edge, hooks and eyes, and a tiny bow to sew on the centre front to hide any messy stitching there.  It’s a lot of extra bits.  You can get them at Lincraft or other craft stores (I guess bra making is more common than I thought).  I’m planning on deconstructing some bras I don’t like so I can make some more with the notions. 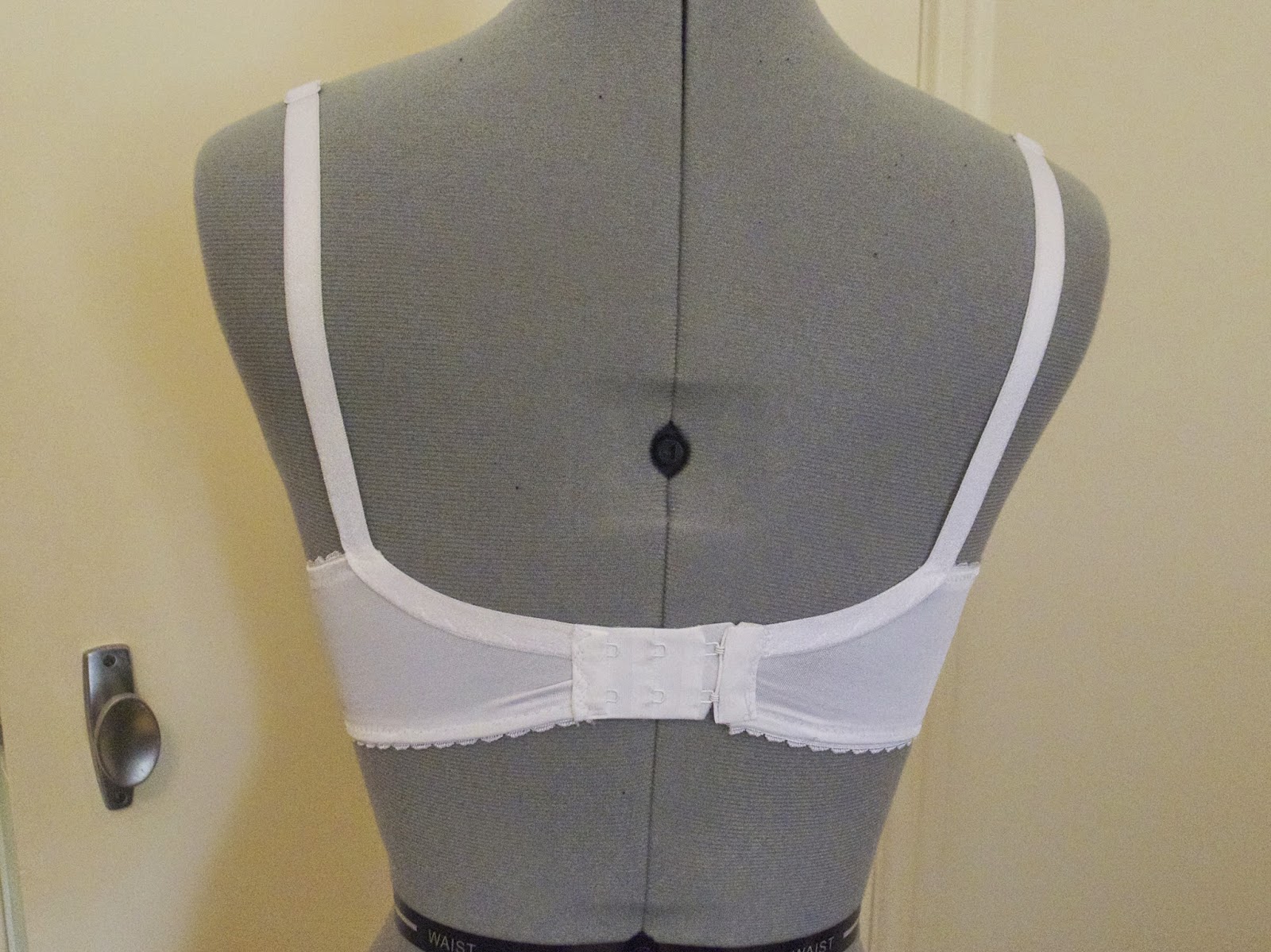 Construction was a bit fiddly because it’s just so small compared to the long straight seams I usually like doing!  First, sew the upper cup to lower cup.  Then sew the frame together (back to side to middle to side to back).  Then sew the cups into the frame.  Then sew the elastic along the bottom.  Then sew the underwire casing to the frame (not the cup!).  Then the underarm elastic.  Then the rings and straps.  It’s fiddly.
Here's a photo of the bra inside out so you can see some of the inside workings.  The seam in the middle of the cups could be irritating to sensitive people but mine is fine.  I just sewed the seam allowance down close to the edge.  It's not like it rubs, bras are supposed to stay put! 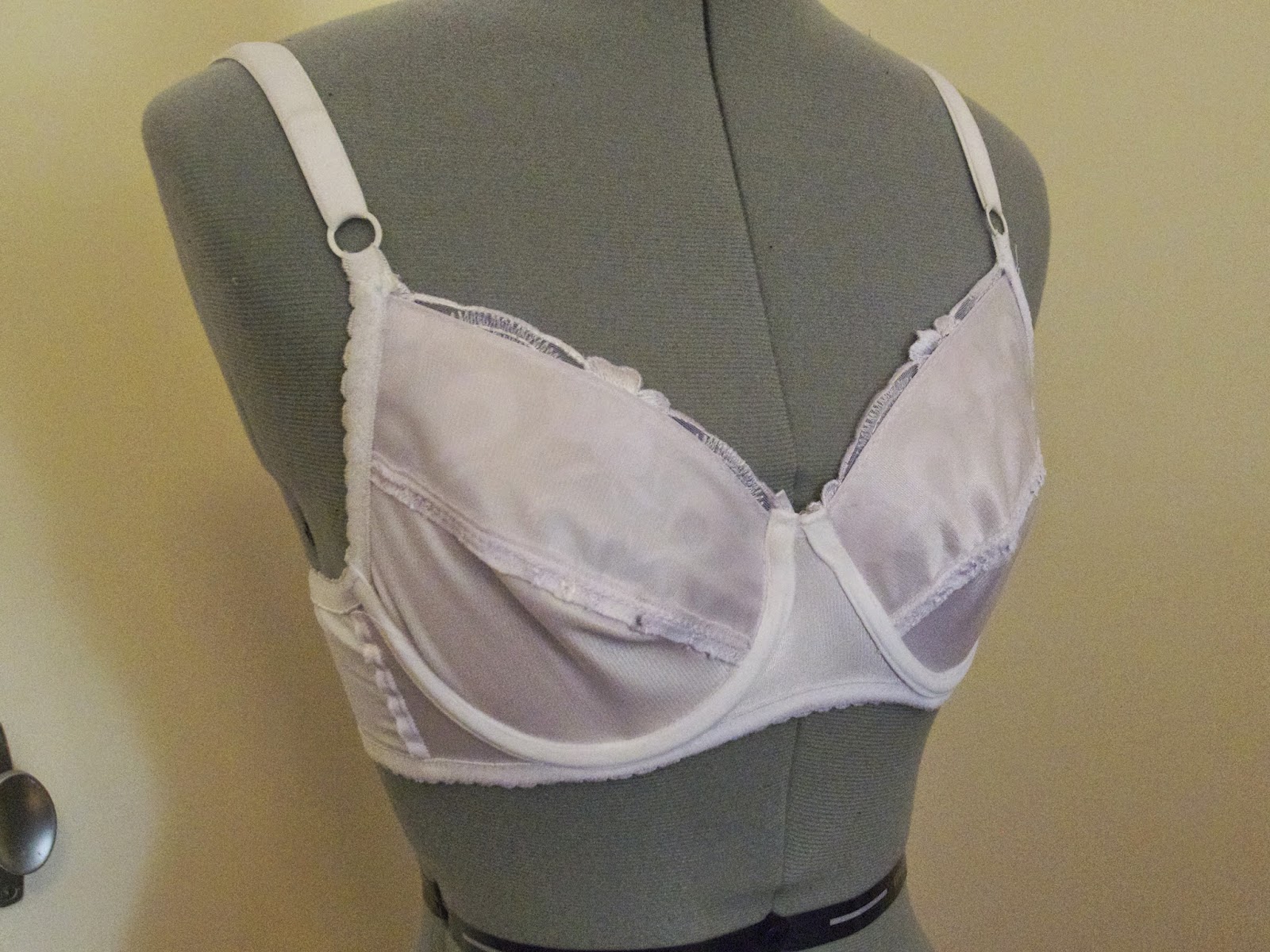 Here is the one I made at home from the kit: 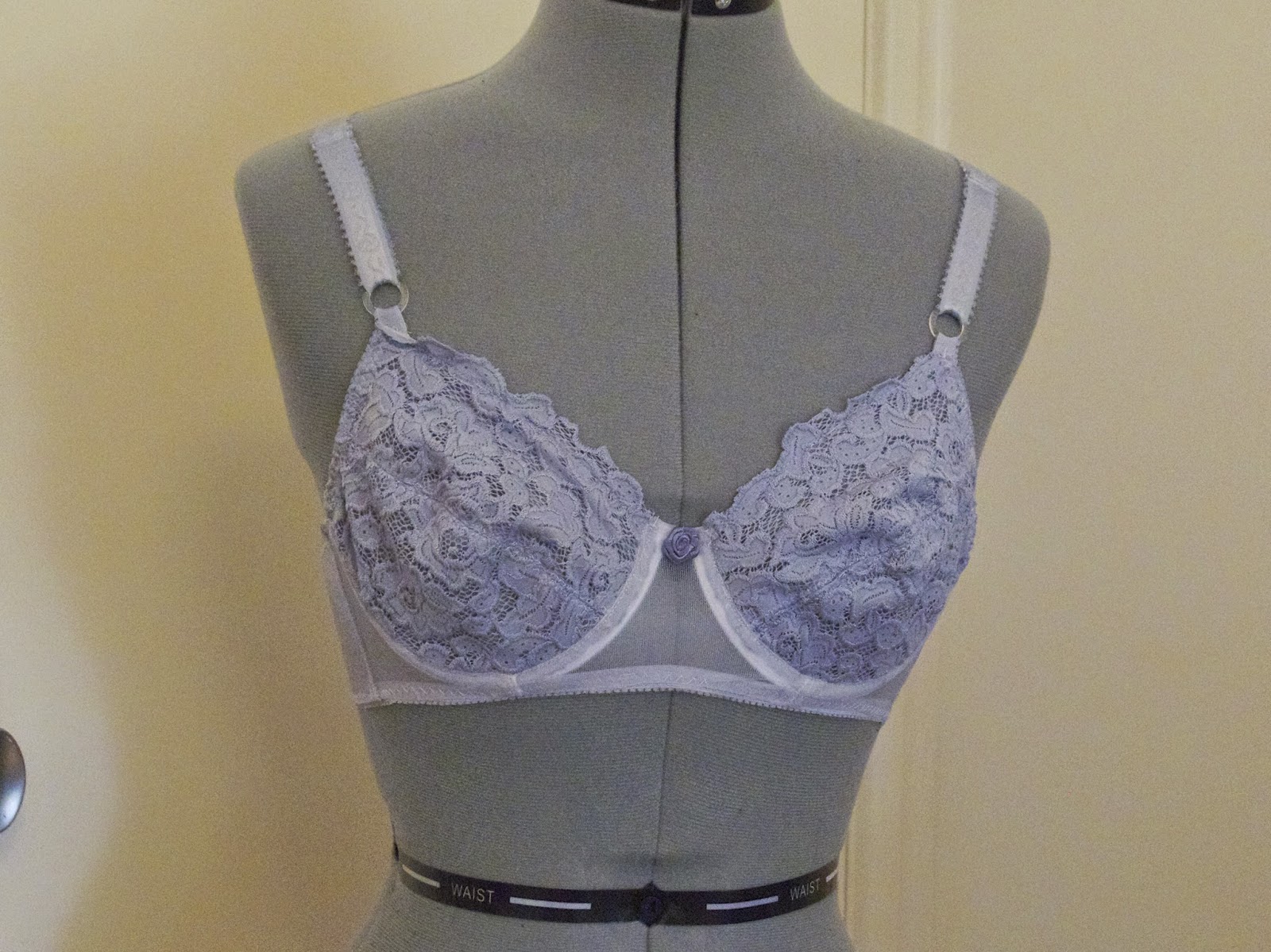 The tricot mesh that came with this kit was much much thinner than the one we used at the workshop, which meant I had to put lace on the upper and lower bra cups (for modesty).  You can see at the front the dressform's grey skin is showing!  So obviously I had to put lace on it! 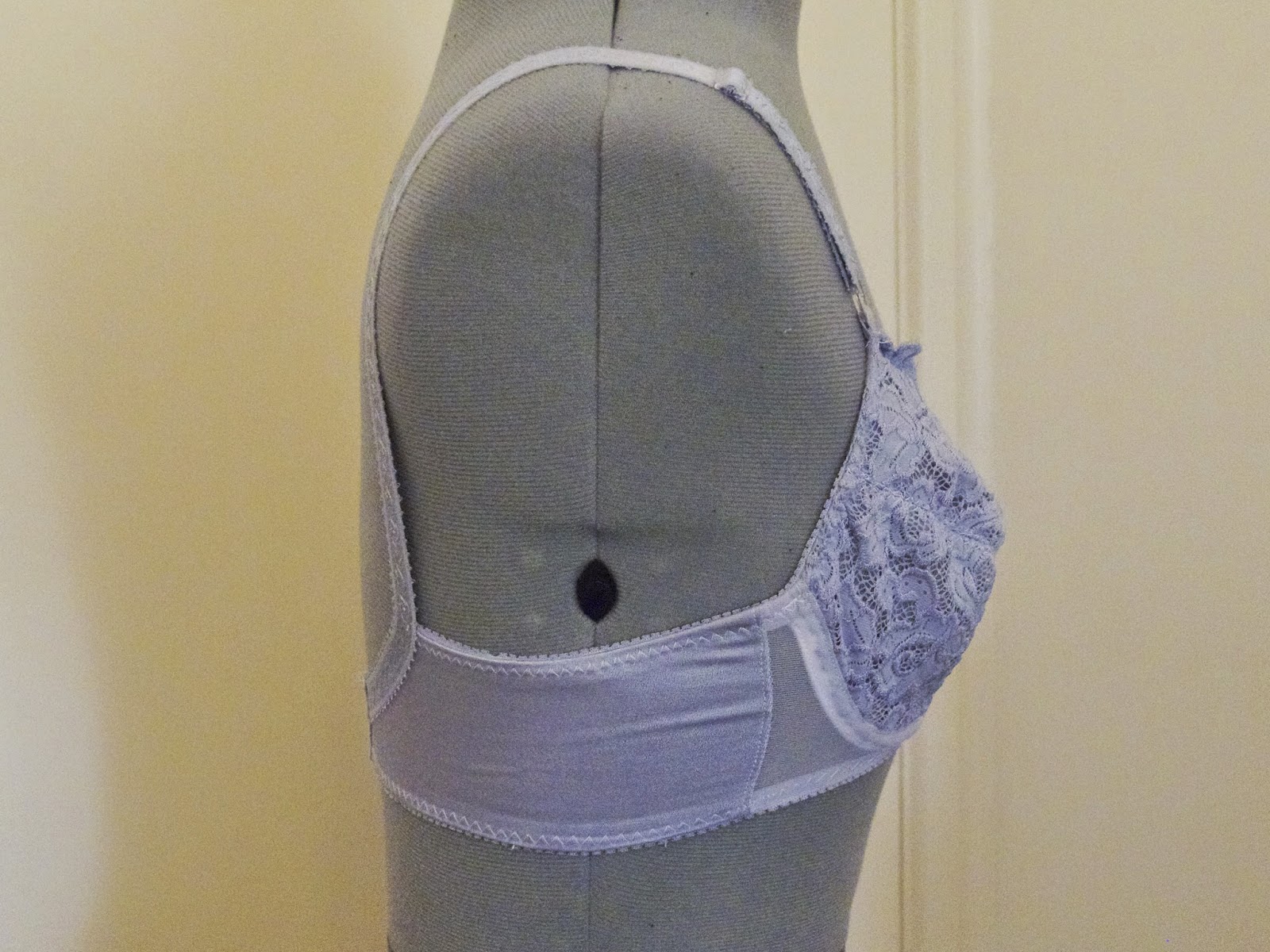 The lace is tacked onto the lining pieces before seaming, which can be quite fiddly.  But because this particular lace is so busy, you don't see the seamline at all! 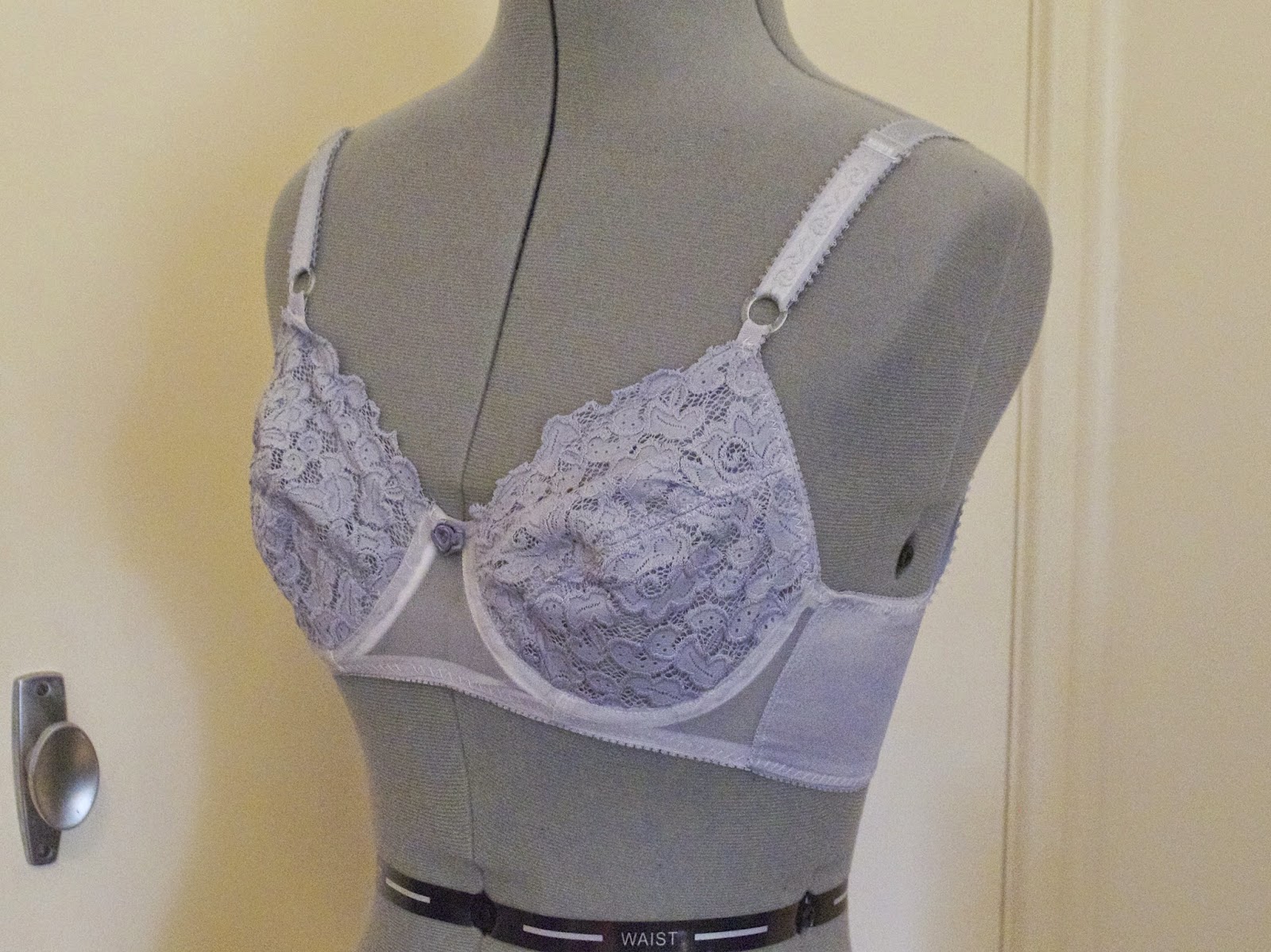 The lace was also quite stretchy and the lining extremely firm so I have some bumps in places.  This one seems to be a bit tighter as a result of the fabric being less stretchy. But it fits and I remembered how to do it!  On my own it took about 3 or 4 hours, and in the class it took 6. So I'm getting quicker! 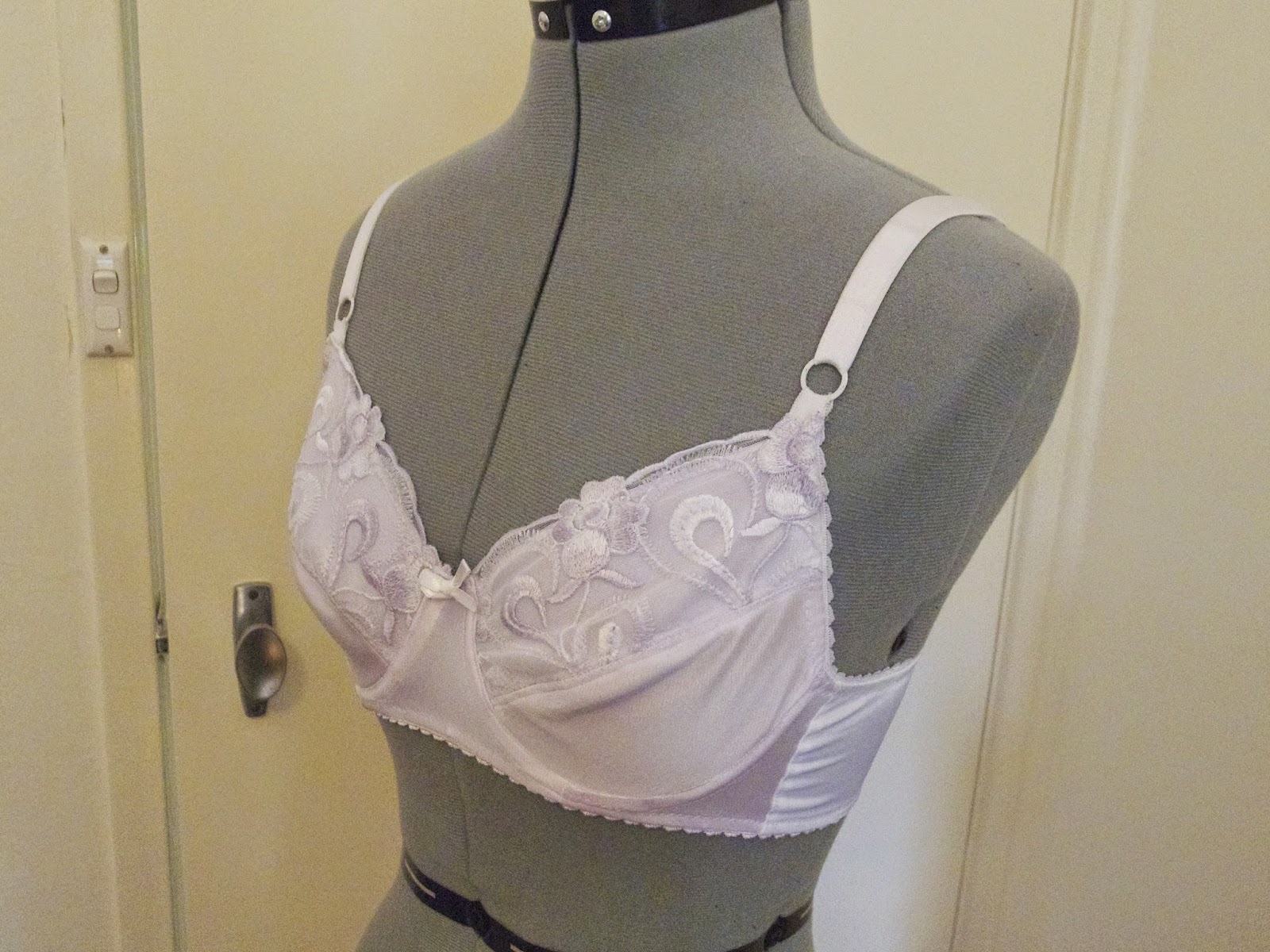 On the Booby Traps website you can also buy kits with the fabric and notions provided.   There are some really cute kits on that website!  The one I bought (I got it at the workshop and can’t find it online) is a pretty soft blue but next I’m thinking of THIS one…
or THIS one... or THIS one… Booby Traps also sells a bunch of ready-to-wear lingerie… but we’re not into that right?  It’s all about the DIY!
So I’m totally converted!  I’m immensely proud of myself for making something so fiddly. I'm going to start making ones from stash fabric and see how that turns out!
Email Post
Labels: bras lingerie sewing