This knit was lightening fast you guys!  It took me a week!  A WEEK!  It would have taken 6 days but I fell into some difficulties... 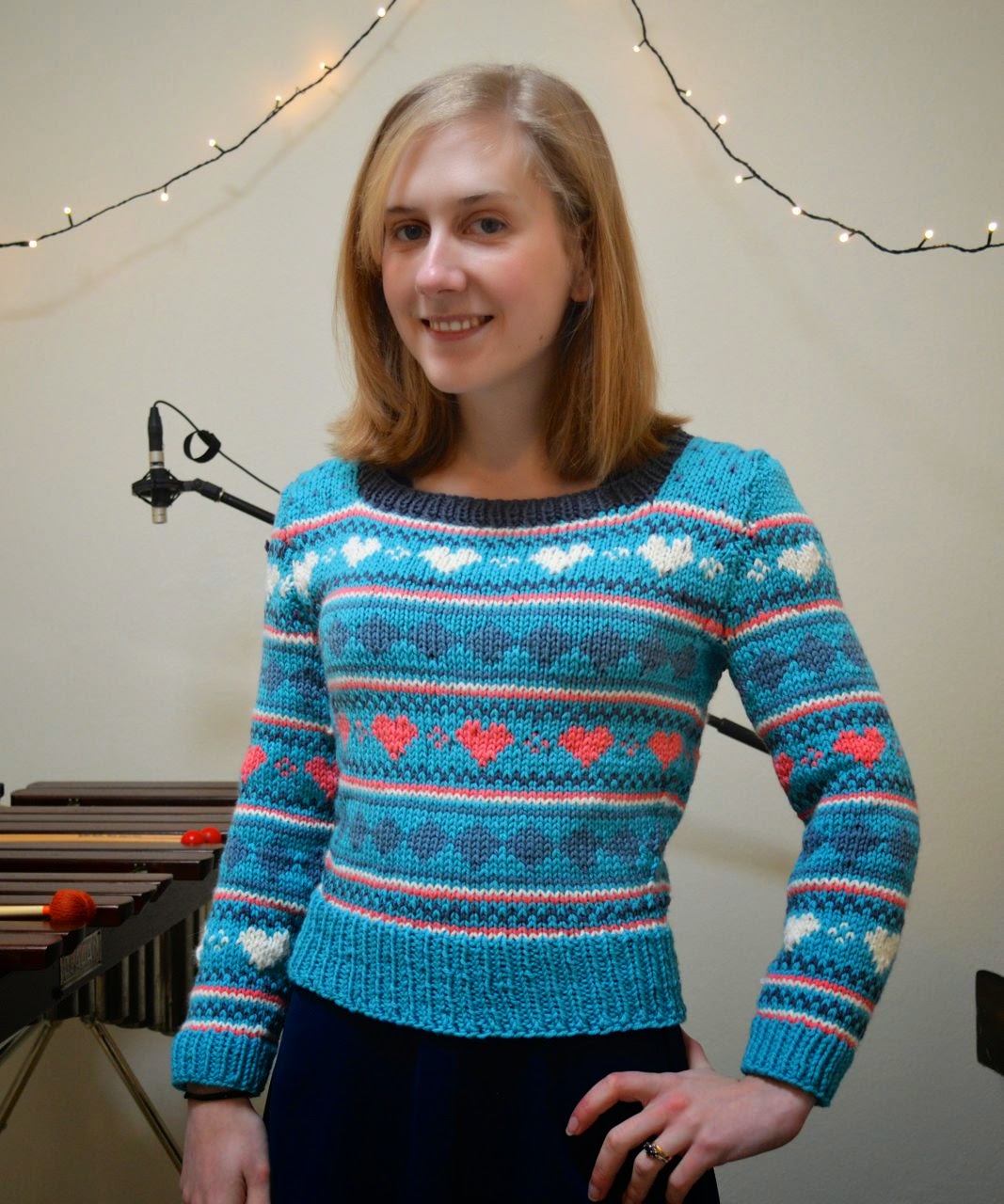 Pattern: A Cropped Sweater for Winter, by Andi Satterlund (roughly)
Wool: Bendigo Woollen Mills Luxury 10ply in Lotus, Aquarium, Slate, etc.
My Ravelry Notes here
This pattern doesn't actually have hearts and diamonds and stripes and spots on it.  I made that part up!  I took the basic sweater instructions and made myself an Excel spreadsheet outline (making all the boxes square).  Then I basically... coloured in!  Making sure all the stripes lined up, and there weren't more than 2 colours in a row. 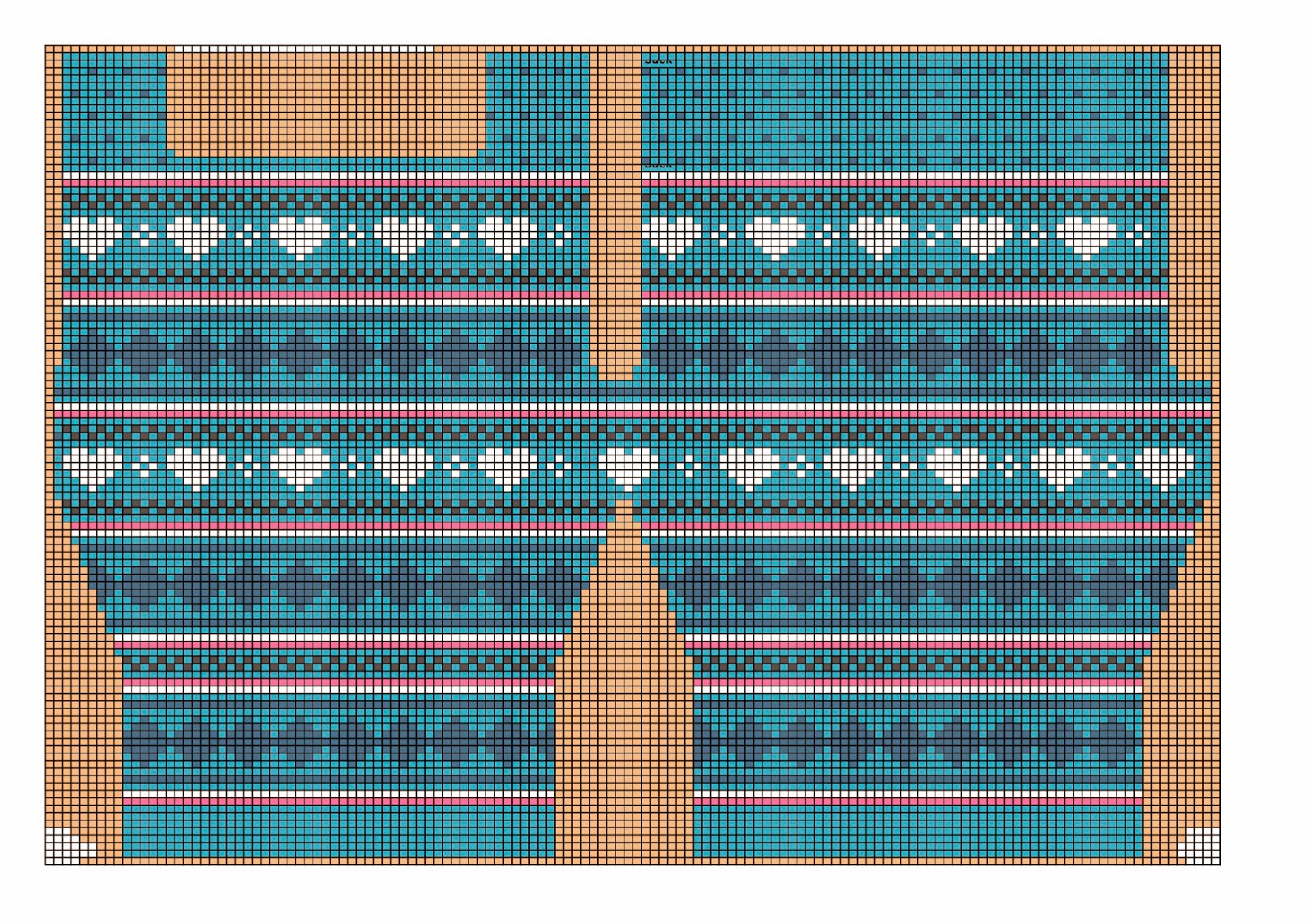 I obviously made some changes from my design, and that was because I almost ran out of white! So pink hearts made an appearance. If I were to do a similar thing again, I'd make sure the hearts ran across the bust line, because they're prettier than diamonds. 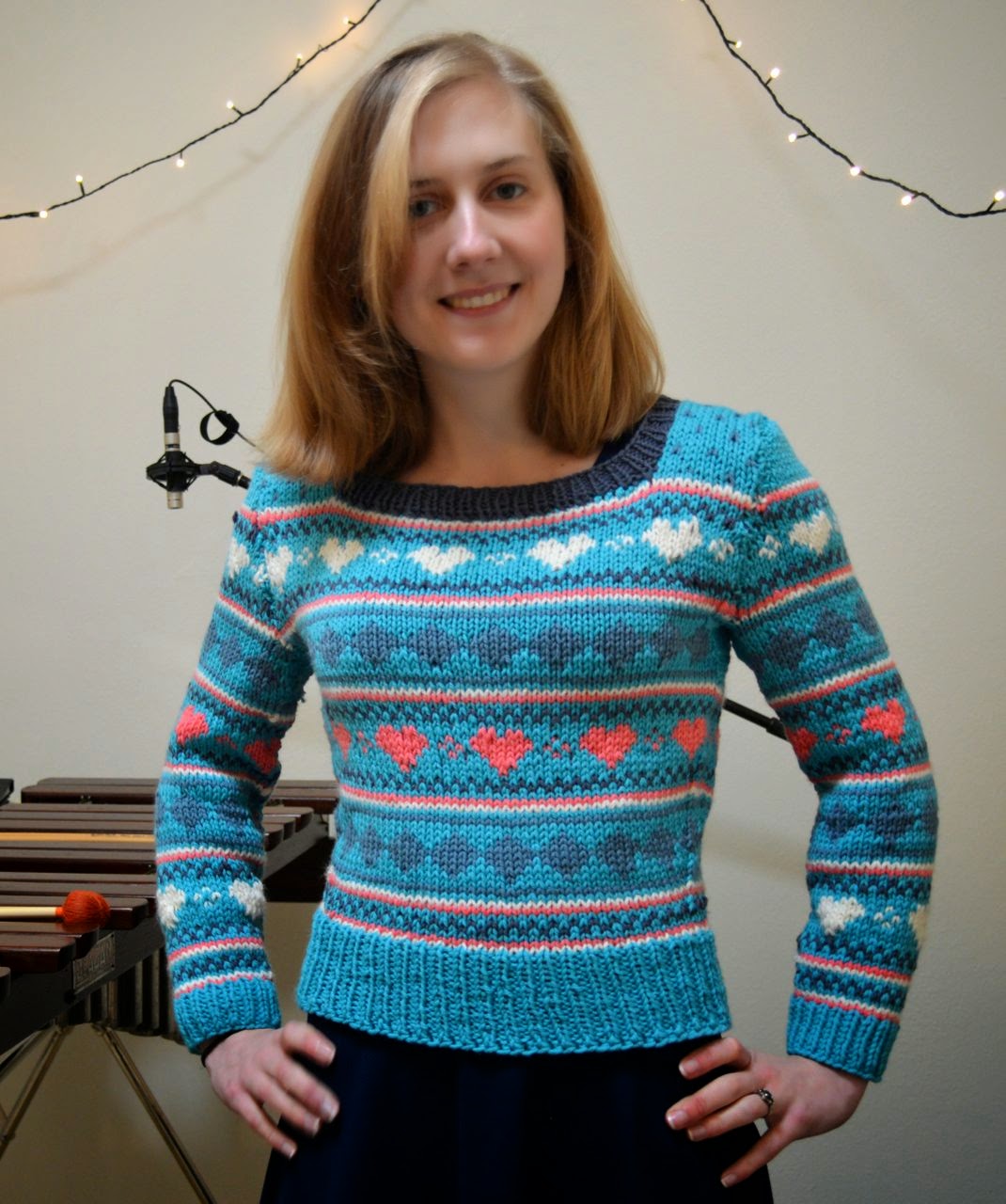 I made sure all the stripes lined up over the sleeves too.  I changed the sleeve construction by doing them flat and then seaming them into the armhole, instead of doing the short rows.  I just couldn't face colourwork with 4 needles!  This photo is to show the colours lining up: 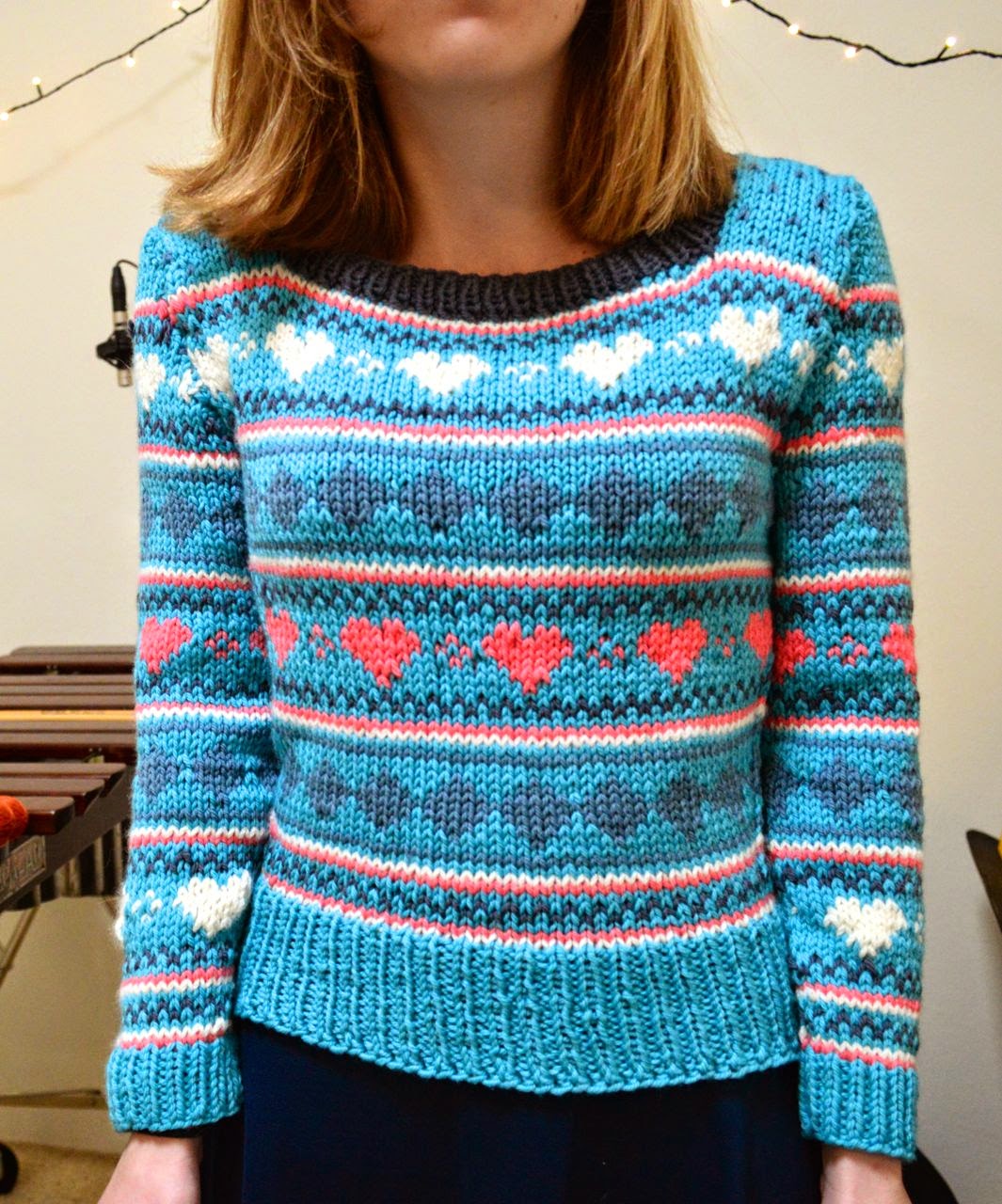 When I sewed in the sleeves I discovered that the armhole was hanging way too low.  It made the sleeve kind of weird and low and tight under my arm.  So I took the sleeves off again and made a kind of gusset to fill in the space.  I did this by picking up stitches from the underarm and knitting up, and doing the same to the sleeve so I didn't have weird excess fabric.  It worked out perfectly, and you can't see unless I show you!  I think it's because my gauge is so loose that it ended up so long.  The original design looks cropped, and mine does not look cropped! 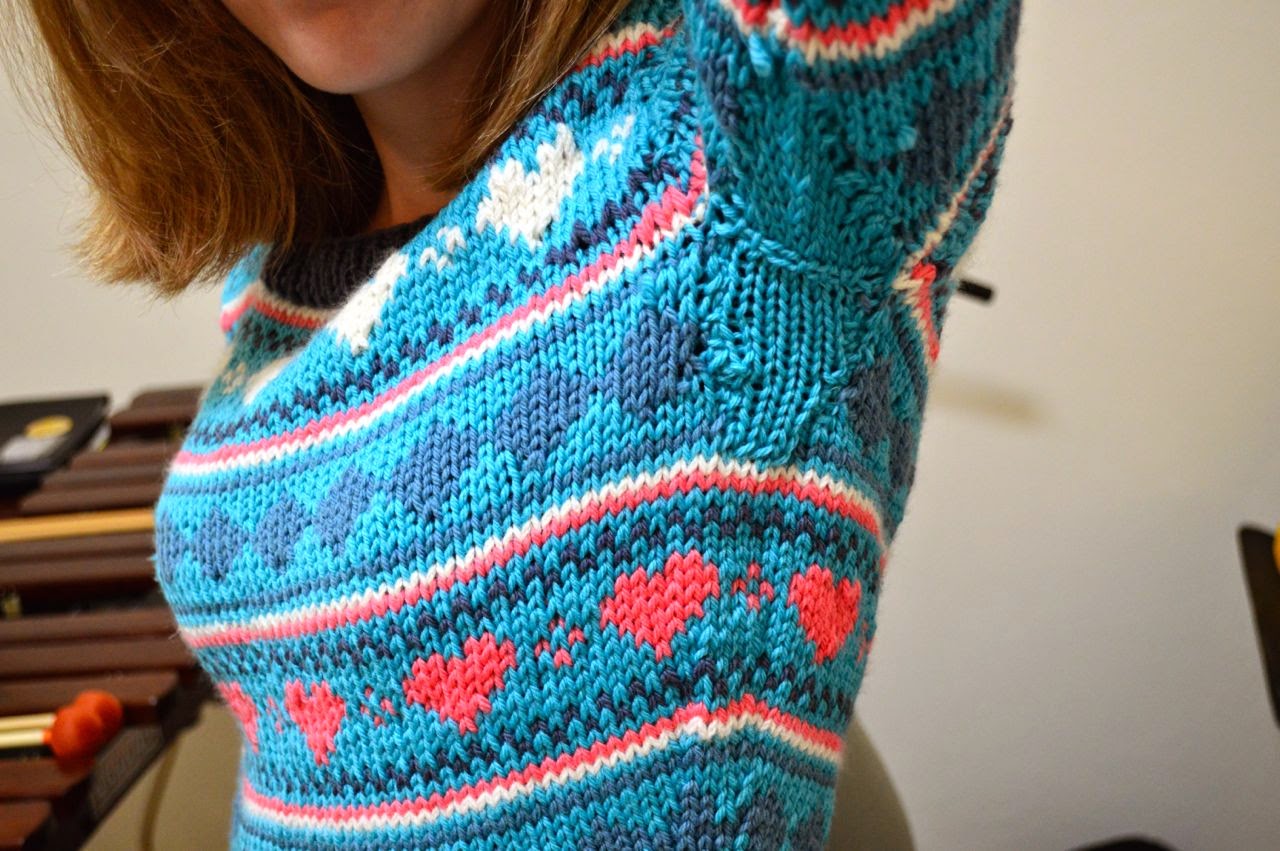 Despite it being a little larger than the design, I like it because it doesn't stretch the fair isle out of shape.  A loose jumper is much more snuggly too.  Don't worry it does fit!  But Andi Satterlund's designs are often made with 2" of negative ease, and I think this has no ease. 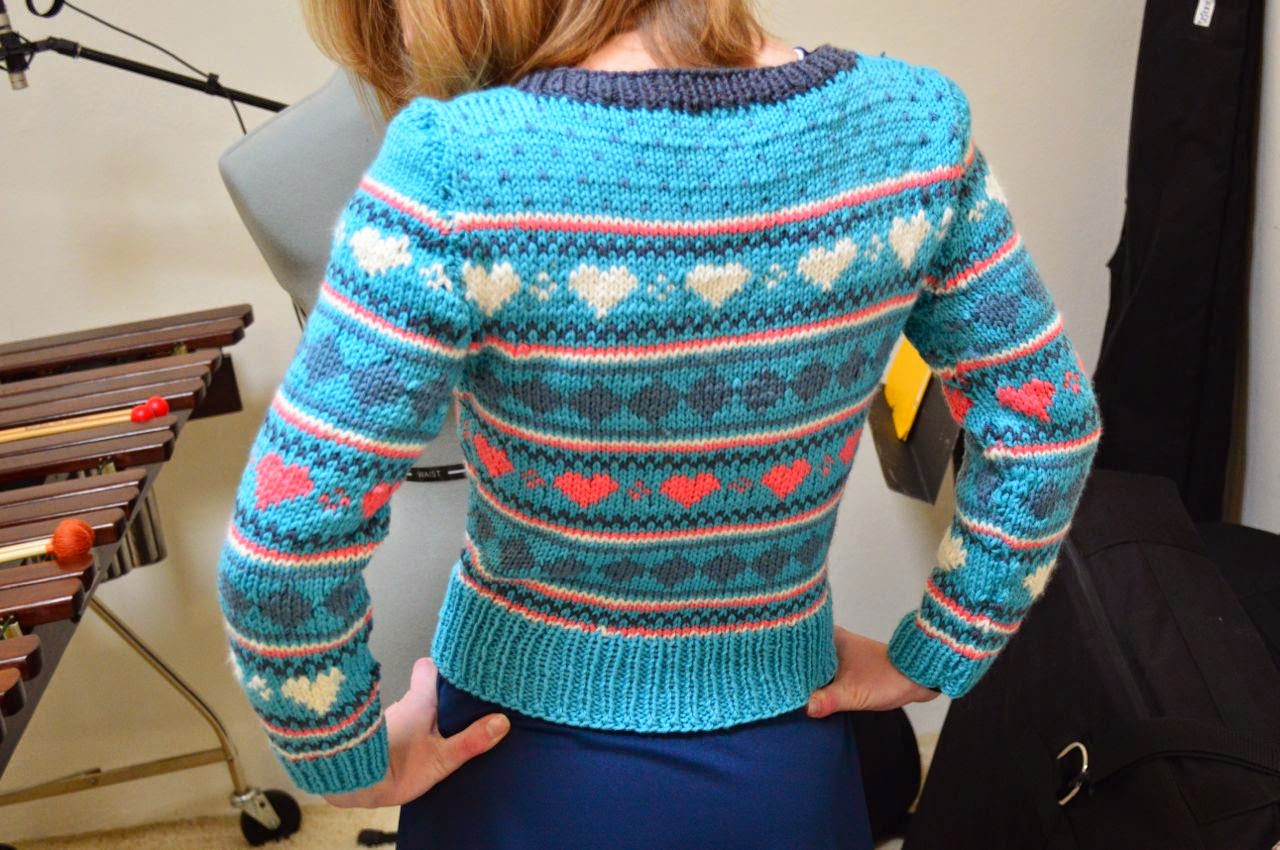 What do you think?  Will you try making your own fair isle designs now? 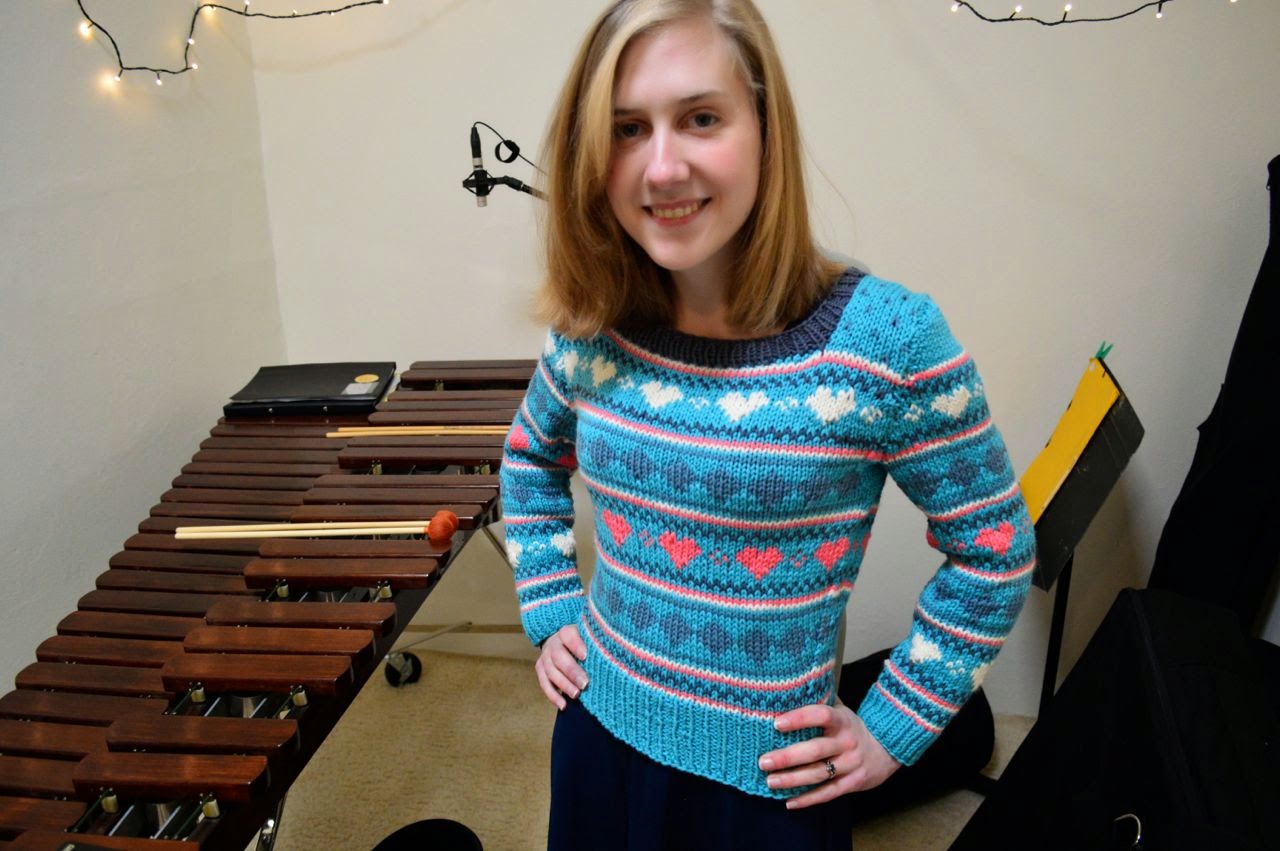