I don't have much to show for myself today - a bunch of failed bodice fittings and a half-finished jumper - so I thought I'd write about the Great British Sewing Bee second series episode 1! I might do this for the other episodes too.

I found out about this show when the first season aired last year - while my parents were in England they happened to see an episode on the TV and knew I'd love it!  The second series is slightly different - 10 contestants instead of however many there were last time, and much harder challenges. 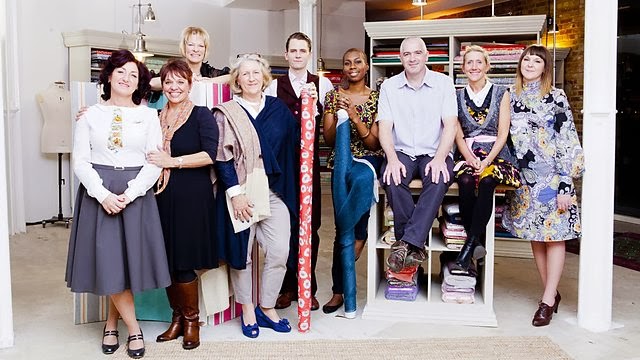 There were three challenges this week, based on three natural fibres: cotton, wool, and silk.  Challenge 1 was to make a cotton top from a pattern, no alteration or decoration.  I think that was mostly to see if there was anyone who *really* shouldn't be there.  There were some lovely cute tops, all sleeveless and with a facing - which had to be made in 2 hours!  Fast!

The next challenge was to take a plain grey wool maxi-skirt and alter it in some creative way.  Basically everyone made it into a mini-skirt with some detail.  I think I would have kept the fabric in one piece but made horizontal pleats to shorten the skirt and add interest.  Can you believe that one guy made a welt pocket in like 30 minutes??  We did that at CIT last week and it took us 3 hours!

The last challenge was to make a fitted silk nightgown for a model.  I learned some tricks about cutting slippery silk - best to do it with a rotary cutter because scissors make the fabric shift.  Some of these nighties were spectacular (some sucked) and I was just so impressed.  It made me want to make a nightie!

This show has inspired me to get back to sewing.  After a few failures recently, I've given up and now I have a big pile of unfinished things and patterns to make.  But failure is just a step on the road to success I suppose, I'd better get back to it.  Totally watch this show!  It's the best!