Monday, Frocktober the 14th! First day back at school

Today I'm wearing the Modcloth dress, Luck Be A Lady in Violet. 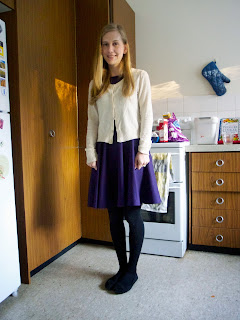 Here's me this morning at 6:45am.  I hate getting up so early on a Monday!  It's because we run the junior school percussion ensemble before school on Mondays.  It's pretty awful - especially today, the first day back.  These are boys aged 9 - 12.  Mostly hyperactive, all naughty.  For some reason today was especially bad, and suddenly two boys burst into tears. We weren't being hard on them.  I asked why they were upset, and one kid said that some other kid took his snare drum.  I managed to fix that problem and he cheered up, but I don't know what was wrong with the other kid.  His mum works at the school and he went to see her.  I wish I could run to my mum when percussion ensemble is crap!  But that would be every monday morning.

Because it's such a bad photo of this morning, here's another one from when I got the dress.  Still with a cardigan!  But much sassier and less like "oh god why is it so early" 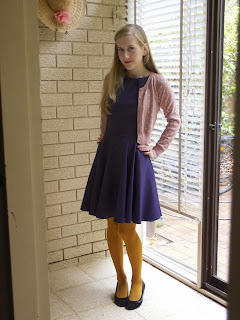 Tonight we're going to see Labyrinth at the movies!  It's my favourite movie and I'm super excited to finally see it on the big screen!
Email Post
Labels: frocktober