Recipe: The Bunnies' Get Well Soup

When I was little, one of my favourite books was The Bunnies' Get Well Soup, by Joan Elizabeth Goodman. 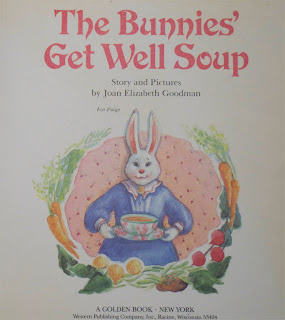 This is the heartwarming tale of Mother Rabbit who wanted to make some nice get-well soup for her six sniffly baby bunnies.

But she only had four celery stalks, three peas, and a wrinkly potato.  She wanted to go to market, but there was a snowstorm that prevented her from going!

So she went to all of her friends' houses to ask for some extra vegetables.  They all said they would LOVE some soup, and they would come and bring a bit to add to the soup.

Mother Rabbit was really worried, because she had so many people coming and didn't see how she was going to be able to make enough soup!  But when everyone came, they all brought a little of this, and a bit of that, and there ended up being plenty of delicious soup for everyone! 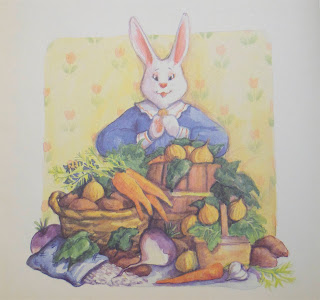 And the end of the book goes like this:
"My dear friends," said Mother Rabbit, "with a little of this, a bit of that you have all made this the best Get Well Soup ever!  Now eat up.  There's plenty for everyone."
So they did. And when they were done, "Hooray!" they said. "Hooray for Mother Rabbit and her wonderful Get Well Soup!"

The best bit about this charming book is that it has the recipe in the front.

Wash, peel, pare, slice, cube, dice, and chop all the vegetables. Half fill your biggest pot with water. Set it on the stove to boil. Add all the ingredients, reduce to simmer.
Cook for one hour or more.
Serve with buttered toast and hugs.

This recipe looks gigantic!  The yams and onions and rice and lentils would really make this a hearty meal.  If anyone tries this out, please let me know! 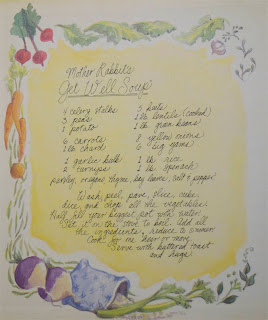