Canberra Day concert - on a boat!

On Monday the 11th it was Canberra Day, but not just any Canberra Day that happens every year.  It was the super-celebration centenary of Canberra! Charles and I (AKA Sticks and Tones) were able to do a super-rad gig on a boat!  All the celebrations and festivities were around the lake, which is at the centre of the city.  The organisers hired musicians to do little tours on boats, and there were boats leaving the jetty every 10 minutes for an hour-long cruise. Our boat left a jetty near the Museum and toured around the perimeter of the lake, under a bridge, and back again!  Here's the website for the day: One Very Big Day. 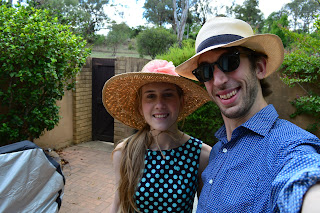 Here's our boat: A huge 140-year-old paddle steamer called Enterprise!  It even has its own page on the Museum website, check it out! It's quite the famous little boat. 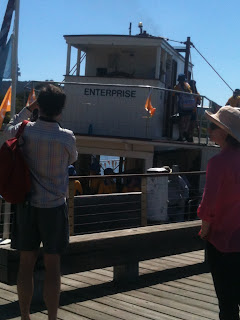 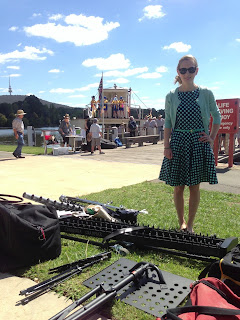 Setting up when we got to the jetty.

We set up our instruments (xylo and marimba) at the front of the boat, so the people on the shore could see us easily! 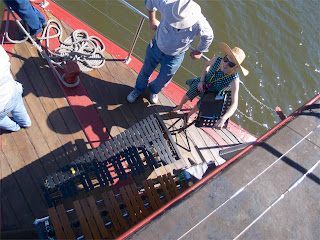 It was pretty hot (28 degrees C) and we were playing in the very height of the sun. It did get pretty warm out there - there's no shade on a lake!  We both wore our biggest hats and wore HEAPS of sunscreen.  We played around 15 songs and that took about an hour in total. By that time we were nearly back at the jetty!  The crew were all lovely museum people.  The best thing was that there was a guy inside behind Charles shovelling wood into the fire to keep the boat moving! 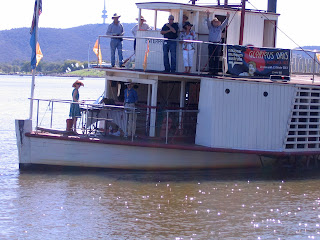 A photo my mum and dad took.
We had a really amazing time going around the lake.  Everyone was really appreciative and we were applauded all the way around.  Finally, a gig where people showed up!  There were literally thousands of people! And everyone on the shore seemed to be having a really good time.  There were lots of activities going on.  Canberra's lake has an enormous fountain that goes hundreds of metres into the air, and when we went past that it was quite distracting!  It was also distracting when we saw some friends on the shore! 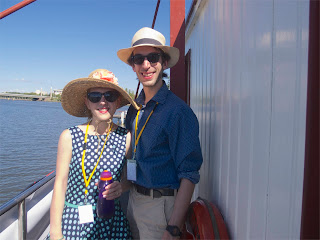 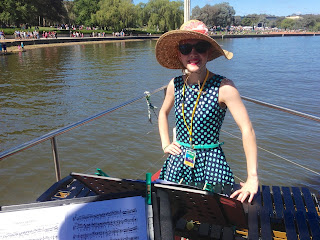 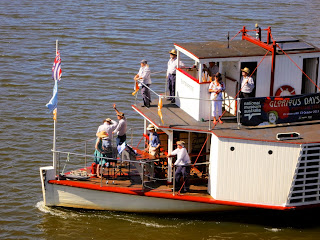 Charles' parents took a photo of us from the bridge! 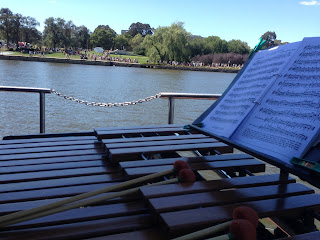 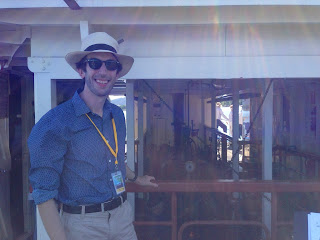 After our gig, we were exhausted!  We went home for a little rest and some food, and then we went right back in to watch the Canberra Symphony Orchestra and the fireworks! 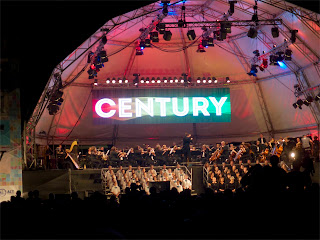 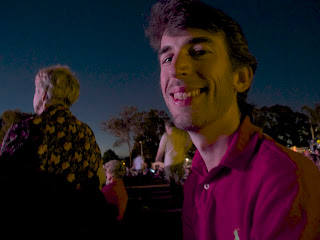 And a funny story to round out the day:

After we watched the fireworks on the grass, we walked back to the car. That's when Charles realised his lens cap was not in his pocket NOR on his camera.  He thought we'd never ever find it and we might as well just go home :-(
But I was determined to find it! It was pretty much an impossible task, because the space was enormous and it was dark and there were still people everywhere. We searched for a while with no result! Then I had an idea of using my camera's flash to light up the ground.  Charles said "That won't work, it only lights up the ground for a fraction of a second!" and I said "Yes - but then I'll have the photo!"
I took 5 photos of grass before finding something that looked a little like a lens cap - a little black dot on the ground. 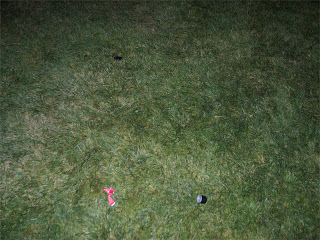 Found it!
The black thing in the foreground is a drink bottle lid, in the back is the lens cap!  Chrissy's brains FTW!  I enjoy proving to my husband that he made a good choice :-)
Email Post
Labels: boat canberra concert event gig ragtime sticks and tones xylophone