I knew my wedding would be at my own church.  This meant that I got to use the hall for free (as a member), the organist was free, the minister was free, the ushers were friends from church, the flowers were done by a lady from church, and the ladies at the church put on a wonderful afternoon tea afterwards (which I sampled none of because I was taken away for photos!).  So that was a whole lot of things we got for free, just by knowing nice people.  A tip: if you're going to get married anytime in the next year, start making friends with your local church people!


1. Flowers
Firstly, our bouquets.  We ordered one medium bouquet for me, a small one for Shona, and 6 buttonholes for the men: Charles, Sam, Lewis, Paul, Dad, and Charles' Dad.  Our mums both didn't want posies.  These flowers cost me around $200. The flowers at the church were done by a church lady, who is a prizewinner for her floral designs.  She did two huge displays at the front, and two out in the foyer.  It was super lovely.  My parents paid her some money for the flowers, since she had to buy them.  I think she only asked for about $100 for them.  Here's a lovely picture of us all at the front of the church with the beautiful flower arrangements on either side of us. 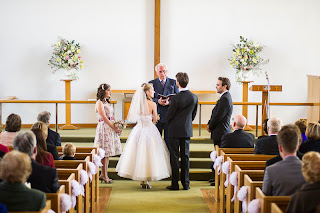 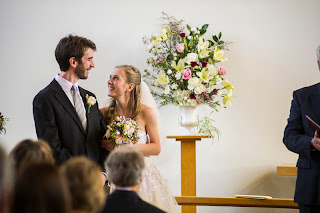 Us having fun!  And look at that gorgeous floral display. 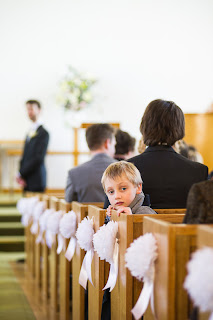 These pew decorations were all handmade and stuck on with blu-tack.  You can find out how to do it from Martha Stewart's website here!  They were an easy fun project for us to do after dinner for a few nights.  Then I just stuck some ribbons on the back for a pretty look!  The tissue paper cost me a couple of dollars, and the ribbon was cheap satin ribbon from Home Base.  Altogether it probably cost me $10. 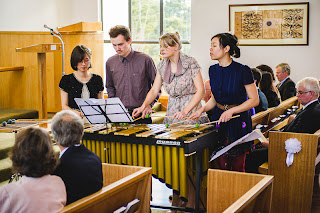 Our musical "item" while we signed the marriage certificate was our friends from the ANU percussion department playing a cool piece on vibraphone.  All the church people were super impressed because it was "percussion", and we got to involve some people we love.  We chose a piece that had 4 people on 1 vibraphone, which looked cool but was also nice and compact.  Our friends packed up afterwards and let us concentrate on getting married. 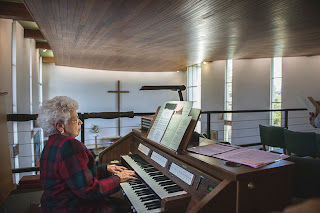 We also had an organist play some hymns for us, as well as the processional and recessionals. 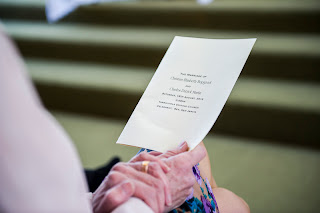 The stationery was all printed by me, and designed by a designer friend who wanted to give us a present, as she couldn't be at the wedding.  She helped us choose fonts, and designed a pretty logo type picture to go with all the bits.  We made programs, invitations, and place cards using her design. 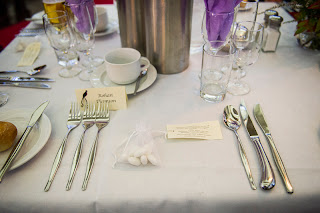 I'd recommend either being very prepared for a lot of work with stationery, or being prepared to pay for it.  Stationery is a lot of work.  I spend hours agonising over fonts, wording, sizing, it just was insane!  But in the end it was really lovely, just how I wanted it, and I couldn't have done it without my friend, who is awesome. 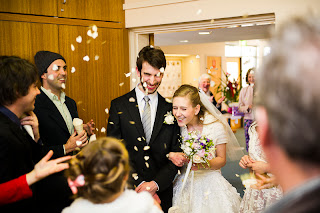 I made the confetti myself out of a rubbish piano book the library was chucking out.  I bought a hole punch with a heart shape and spend hours punching holes, making little music hearts for confetti!  It was laborious but kind of fun in the end. 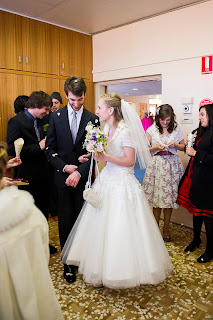 And the little music hearts reflected our love in a way!  That sounds so cheesy.  But true? 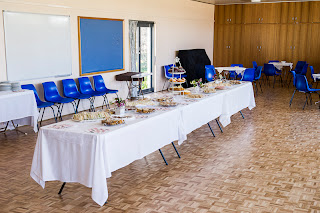 This was the afternoon tea spread.  A lot of people offered to bring things, so if you're on a tight budget you can always ask!  People will never be more generous to you than when you're getting married.  It was nice to have an afternoon tea, because the official reception wasn't for a couple of hours and this way we could give something to the people who came to the wedding, but not to the reception later.  Writing the final reception guest list was one of the hardest things I've ever done, because I love all my friends so much.  So this was a lovely way of saying thanks. 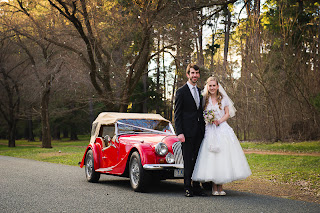 A lovely man from church owns this gorgeous little sports car, and offered to let us ride in it for our wedding!  He was very kind and drove us all around everywhere.  The car was pretty fancy, but also tiny!  And windy!  My hair got so messed up because of the car!
Hire cars are pretty, but expensive and exclusively driven by douches in tuxedos.  So my advice is to find a friend - or a friend of a friend - who has a nice-ish car and use that.  We only used one nice car, which drove my dad, bridesmaid and I to the wedding, and Charles and I to the reception.  Everyone else had their own transport.  The focus is always on the bride (which is good and bad), so you really only need one car.
If it was raining, our backup was just to use Charles' dad's car, which is a fairly nice Audi.  But I'm glad it wasn't raining! 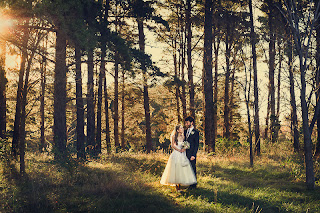 Conveniently, the church was right in front of this little pine forest, so we could just go out the back door and take some pictures!  You won't want to drive too far because it's a long day. 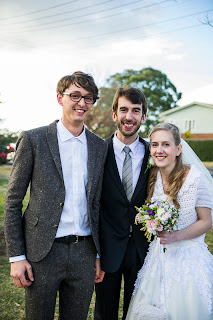 And most importantly, the photographer!  He is also a good friend, and as such gave us significant mates rates!  In fact, he refused payment at all and my parents had to mail him a cheque to get him to take anything.  ALSO it turns out his photos are the BEST ROHAN SO THANKS AGAIN.

A word about photography.  Some photographers have a list of the photos you'll get when you hire them.  E.g. you'll get the groom-putting-on-his-tie photo, and the two-intertwined-hands-with-wedding-rings photo, etc.  I was recently at a wedding with photographers a bit like this and the photos were kind of staged (not the wedding itself, that was lovely).  People were being told what to do, how to smile, in their own wedding.  Of course, that's what you have to do if you want that particular set of pictures.  I really enjoyed my photography because he captured moments that were real, and the event photos weren't intrusive or fake.  We did take some extra photos at some nice locations, with some pretty trees and books, but at no point did Rohan tell us to do something cliched, except to pretend we weren't cold.  There's something special about our wedding photos, because they are genuine.  We were really having a lovely time!  Charles and I really like each other.

So how much money did we spend at the church?  I bought presents for the organist, minister, my readers, percussionists, photographer, ushers, car man, and flowers lady.  But I don't think we actually PAID anyone for this section of the wedding.  It was really convenient that I go to this church!

I guess the moral of this post is to recognise the talent and possessions that your friends have.  If your friends have a nice car, ask to borrow.  If your friend is good at drawing, as them to help design some pretty stationery.  It takes a bit more effort perhaps but it saves lots of money, and it involves the people you love in your special day.

The next part is about the reception!
Email Post
Labels: music paper photo photograph photography wedding