As most people know, Charles and I got married about 2 months ago.

In Australia in 2011, people were spending around $36,000 on their weddings.  Crazy right?  I have never even HAD that much money.  Our wedding cost MUCH LESS THAN THAT and in this series of four posts I will show you how.

1. The Dress
I never intended to spend too much money on my dress, because I don't have much money.  But of course the dress has to be special, because you only get married once (hopefully)!
Even though I like sewing, I decided against making my own dress.  That would just be way too frustrating!
I did the rounds of the wedding dress shops with my mum, and was mostly disappointed with what was on offer.  Everything was entirely too huge and heavy and expensive.
Eventually I found a dress I loved, which was the Justin Alexander 8465.  It was also $2000.  This really upset me, because I *really wanted it*, but could not justify the price.
The dress hem hit just above my ankle, the shop girl called it a "waltz length dress".  It's a very 1920s movie star dress - so obviously it was for me!  It had intricate beading all over the bodice and some of the skirt.  The waist was ruched satin. Love love love.
I decided not to buy the dress.  But then one night I was mucking around on the internet and found a cheap knock-off website called Your Wedding Dress - which has since mysteriously disappeared (there are plenty of others just like it).  They had the same dress for sale for $180.  Ten times cheaper!  I thought, if I buy it and it's great, I win.  If I buy it and it sucks, that's only $180 down the drain.  And I'm sure I can make something else out of it if it really sucks.
And it came and it didn't suck!  There were a few differences.  Firstly, it was a bit big.  Secondly, there was no beading on the dress.  Both of these things I could fix.
I took the dress to a tailor and got it taken in.  $200. 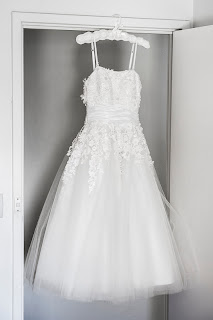 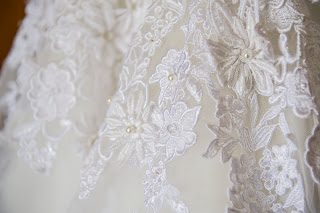 I hand sewed on little crystals and glass pearls. 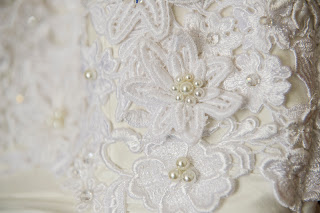 In the middle of every lace flower, I sewed some beads.  This actually took ages and was really fiddly but it was worth it in the end.

2. The bolero
Then I realised that my wedding was going to be in August in Canberra - not exactly warm!  We reached something like 15 degrees that day.  So I bought some little boleros for me and my bridesmaid from Etsy.  It was really hard to find something appropriate, but I finally found Vara.  She worked with me to find the right shade and texture of yarn, and used our measurements to make two matching boleros.  It wasn't much, but it did help in the chill wind!  She was a pleasure to do business with. 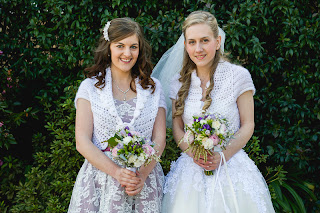 3. The Veil
As for my veil, I made that.  It was not too hard!  You need a clear hair comb, and a big rectangle of tulle, and then you gather it and stitch it on.  And round the edges.  And sew on beads if you want (I didn't).  I think I roughly followed this tutorial on CraftStylish.  But I didn't hem the veil, as I wanted a more floaty look.  I also made a thick plaited ribbon decoration and glued it to the top of the comb, instead of flowers.

4. The Shoes
My shoes were actually a gift from Charles, so they didn't cost me anything.  But I think they were around 90 pounds from London's Irregular Choice.  They are called the Mrs Lower shoes.  I wanted these cute shoes because I knew my dress was shorter!  I've heard of brides with floor-length gowns wearing ugg boots!

Here is a link to Irregular Choice's Wedding Collection.  There are lots of beautiful shoes there! And as you can see, mine is still for sale. 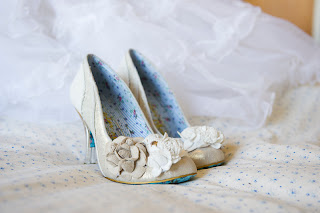 I love my shoes.  They have clear heels with gold leaf inside in the shape of a rose.

So how much is this wedding costing me so far?

If you want to include the shoes, the total comes up to around $580

Next post in 2 days: The accessories, hair and makeup!