Generally when I'm doing my makeup I use my Naked 1 palette, Innoxa quad, or my Maybelline gold quad - all of which are fairly neutral and flattering colours.  Browns, golds, taupes, champagnes, plums.
But I had a whole lot of other eyeshadows that aren't in high rotation, all in little individual packages cluttering up my drawer.  So I decided to consolidate them into one palette by removing them from their packages. 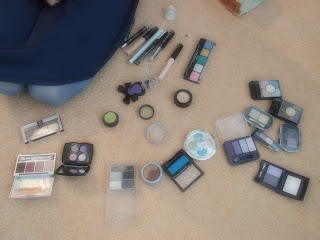 Here's my collection before.  The ones on the left I didn't include in this because I was so scared of cracking them!
I used a sharp knife to prise the metal eyeshadow pans away from their plastic boxes.  They're stuck on with annoying glue, and you have to be super careful not to bend the metal or your eyeshadow will shattter.  If they shatter a little bit, you can fix it just by pressing down with your finger.  I shattered one of mine irreparably, so be careful!  You also will want to put down some newspaper because it can get a little messy.  Sometimes I accidentally stabbed the shadow and a chunk came out. 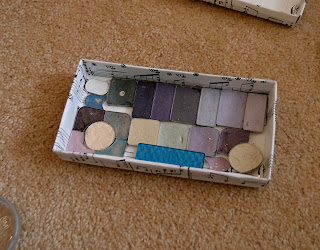 When I was done, this is what I had.  I popped them in a little box, but had some others so changed packaging.  Notice how many purpley blues there are?  I count 10 purples of various shades (I think the camera didn't capture it quite)!  I don't think that purple eyeshadow looks good on me now.  But I must have liked it at some stage! 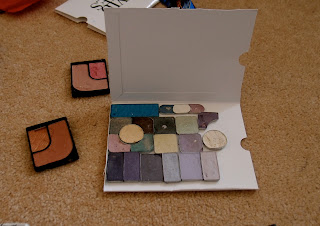 I transferred it to a little cardboard envelope that used to house a David Jones gift card.  I cut it down the side to make the lid.  I don't have any way of keeping it closed, so I'm just careful with it and keep it on top of things in my drawer.

You can get magnetised palettes from various places online, which would be great for keeping your eyeshadow pans in place.  I was too impatient so i just did it without one!

This has cleared out a lot of space in my makeup drawer!  I'm trying to use some of these up, so keeping them all in the same place will help me with that.  Maybe I'll do some Smurf makeup to use up all that blue...
Email Post
Labels: craft makeup