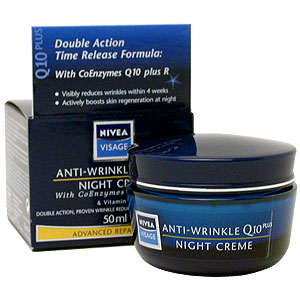 In my constant quest to find a product that lessens or eliminates my dark under eye circles, I came across the Nivea Q10 range.  I bought the night cream and the eye cream.  I know that Nivea spells it 'Creme' but we all know that they only do that because it's fashionable, and it's not actually how you spell cream.  This is what the Eye Cream blurb says:
With age, skin loses its ability to produce energy deep within the skin's cells. As a result, wrinkles appear and deeper wrinkles are further accentuated.
Now enriched with twice the amount of skin’s own CoEnzyme Q10 as part of a high performing Anti-Wrinkle System, NIVEA VISAGE Q10 PLUS Advanced Wrinkle Reducer Eye Creme activates skin’s energy metabolism from within thereby continuously fighting wrinkles in the deeper layers of the skin’s surface. The fragrance-free light, caring formula is easy to apply and quickly absorbed.
Result:
And the night cream adds:
During the night, when skin is most receptive for moisture intake, the intensively moisturizing formula replenishes & regenerates skin most effectively from daily stress for soft & supple skin in the morning.
So!  It says that appearance of dark under-eye circles is minimised.  I'd like that!  So I started applying both products every night.  Here's what I thought of them:
Packaging: Win.  The night cream comes in a lovely little glass jar which made it easy to get out.  It's also blue!  The eye cream comes in a squeeze tube.  Easy to get out but hard to get the dregs at the end.  A bit like a tube of toothpaste.
Amount:  Win.  They both lasted me about 4 months, with the eye cream lasting longer by a few weeks.    That's a pretty long time, and I am fairly generous when I apply this kind of thing.  I want it to WORK dammit!
Dark under-eye circles:  No effect.  The only reason it would make your dark circles diminish is because the cream is white.  It doesn't actually DO anything to your skin colour or anything.  People still told me I look tired.

Fine lines:  No effect.  I have fine lines around my eyes - have done my whole life* - and almost have some on my forehead.  While these creams didn't promote wrinkles, I also didn't find them diminishing, even after 4 weeks as advertised.

Moisturiser: This is such a good moisturiser!  If you want a great luxurious moisturiser, then this is the stuff.  It's thick and absorbs well and really does leave your skin soft and velvety smooth.  The reason I stuck with this stuff for so long even after it had no effect on fine lines or dark circles was because it was such a great moisturiser.
Price: A bit pricey I guess.  I think it was around the $25 mark for the night cream and $12 for the eye stuff.  It would be more worth it if it actually worked.
Originally I tried Olay's product range, but it always burnt my skin.  Nivea doesn't irritate at all.  All in all, a really nice moisturiser!  I would buy again - but after I finish using my next trial run!  Now I'm using Beauty Minerals eye cream for a while!  Review to come!
*When I was in year 7 I went to a friend's sleepover and we did each other's makeup, and the girl who did my eyes said "you have really wrinkly eyes."  I thought it was such an insensitive thing to say, and it's really stuck with me.  People don't realise that the things they say can make such a huge impact for a lifetime.
Email Post
Labels: product review