Skip to main content
Labels
Posted by Chrissy May 22, 2011 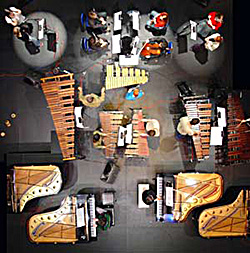 (Photo from the 2004 version)
For the past few months, our ANU Percussion Ensemble (DRUMatiX) and some other ANU instrumentalists have been rehearsing Music for 18 Musicians by Steve Reich.  We finally performed it today at the Fitters Workshop as the grand finale of the Canberra International Music Festival.
I personally have fond memories associated with Music for 18 Musicians.  It was performed by the DRUMatiX back in 2004 when Charles was in first year and I was still in year 11 (See above photo from GaryFrance.com).  It was in a concert with lots of pieces, and I went to see Charles perform mostly.  He wasn't in 18 Musicians so we could sit and watch it together.  It blew my mind!  That was my first Reich exposure.
It's a piece with lots of instruments: 3 marimbas, 2 xylophones, vibraphone, 4 pianos, 4 singers, 2 bass clarinets, a violin and a cello.  It's a minimalist piece with not much in the way of melody, so I would call it a sound work rather than a regular instrumental piece.  It's exploring the different sounds that the combinations of instruments and harmonies can create, in a very repetitive and mesmerising way.
I was the Xylophone 1 player - that meant I had the easy part of playing on the beat while my friend the Xylo 2 player had to play off the beats.  Difficult for her!
Today it was kind of cold in the venue so I wore my cardigan - but that turned out to be a huge mistake!  I got extremely hot playing and almost died.  I managed to take off my cardigan in a resting part and felt better.  The piece itself went very well indeed!  All the wonky bits went very smoothly.  We got a standing ovation and each got a flower.
The performance was in the Fitters Workshop in Kingston.  There has been a lot of fuss recently in Canberra about that venue, because it is going to be scrapped as a music venue and turned into a gallery or something.  Musicians from all around are throwing hissy fits because they claim that it's a wonderful venue for music, acoustically and visually.  There have been petitions and letters to the paper and blogs and speeches.  I agree that it's okay acoustically (if you're a singer or a solo guitarist or something) but the problems associated with performing there outweigh the benefits.  Charles wrote a great blog about it recently, and I have some thoughts to add to his. 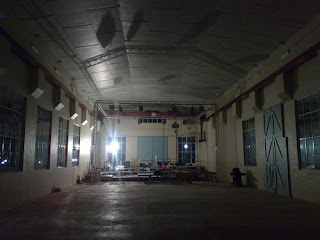 (Fitters Workshop, Kingston.  Basically a barn.)
I've been rehearsing and performing there on and off for over two weeks now.  And I have to say it's one of the more unpleasant places to play in Canberra.  During the day, the sun shines in the giant windows and blinds everyone - players, audience - and also is really hot on whoever it hits.  At night, it becomes super cold and the drums all tighten up.
All the venue is, is a hall.  Everything else has to be provided - toilets, seating, heating, lighting, ushers, even the stage needs to be brought.  There's no backstage area and no foyer. No toilets, you guys!!
Why do people like it so much?  It's trendy because it's in Kingston, the venue has an arty sort of history, it's next to the Glassworks and the Markets (two very fashionable places to be seen), it's nice to look at, it has free parking, and it's cheap to hire.  Oh, and apparently it has a nice acoustic.  When rehearsing 18 Musicians in the venue, we've been having enormous trouble hearing each other from just metres away.  The sound is good out in the audience, but it's extremely difficult to stay in time.
So in short: today they had a petition to save the Fitter's Workshop and I didn't sign it.
Here is the link to some Photos!  All photos by Greg Marginson. 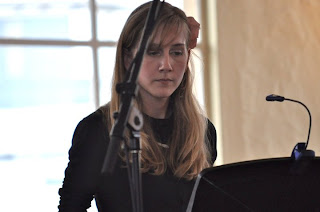 Me before I took my cardigan off!  I had a hot flush!  But I played very well nevertheless!
Email Post
Labels: blog life music percussion