Skip to main content
Labels
Posted by Chrissy May 10, 2011

My friend had his 21st birthday party the other night and we threw him a surprise party with a Lego theme!  He's really into Lego, which is awesome, because Lego is the BEST TOY EVER.
I was given the task of a Lego birthday cake.  I'd seen a few on the internet which looked amazing, but mostly used fondant icing which I don't like.  So I made do with buttercream icing (sooo delicious - I always make too much on purpose).
First I baked two vanilla cakes - a rectangular loaf cake and a square cake.  I cut them into pieces, after planning it out.  I made a 2x4 block, a square 2x2 block, and two 2x1 blocks.
Here are the bits of cake prior to putting the knobs on.  That pile at the back is my offcuts! 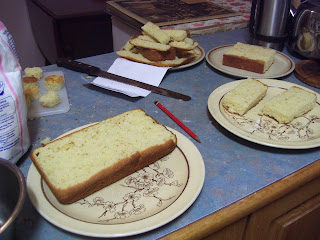 Nobbly bits cut out of cake.  They were a bit uneven but that's what happens when you're not a baker. 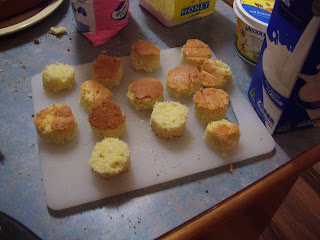 Finished product!  Looks a bit homemade, because I had trouble with the icing not wanting to stick to the cake.  But gosh it tasted delicious! 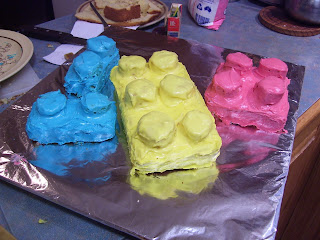