Skip to main content
Labels
Posted by Chrissy May 15, 2011

It was a dark and stormy night... on Friday the 13th...
On Friday the percussion ensemble met at uni at 9am to begin our giant day of concerts.  We had two to perform in the one day - one in the High Court, and one in Albert Hall.
Each concert was to use a giant percussion setup, none of which overlapped at all.  We hired a truck and started packing for the first concert, which needed lots of cymbals, two marimbas, two vibraphones, and a giant tam tam, amongst other things.  We played that first concert with Synergy Percussion, which was fun.  They played a great piece called Good Medicine which I really liked.
After that concert, we packed up all our stuff and shoved on over to Albert Hall.  Gary took some boys in the truck back to uni to get the rest of the gear (sooooo much stuff...) and left us girls to set up what was left.  Eventually everything was there and we set up for the concert.
It sounds so easy when I write it down!  It was super exhausting.
Then we played the concert, with a huge re-set in the middle.  Photos: 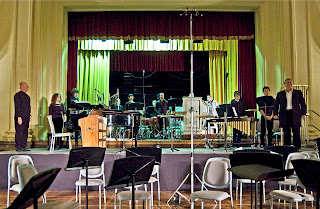 This is the first piece we did, you can juuuust see me in the back there.  This was the Lou Harrison Organ Concerto we played with the amazing organist Calvin Bowman.  It says on the website it was with Synergy, but it was NOT.  Every time it says "DRUMatiX", that's us! 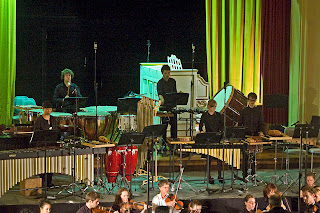 Next piece: Carmen, as arranged for small string orchestra and percussion ensemble.  More gear!
After the concert, the organiser said "We need to have the stage clear in 20 minutes... there's another concert on" so we had to run around like hairy goats trying to pack everything down.  Then it was back to uni to put everything back!  Two truck trips!
So we eventually got to leave at about 10:30pm after starting at 9am that day.  Long day!  But it was good fun to be with my percussion friends all day!
Email Post
Labels: life music percussion