I do lots of craft sometimes.  I like to have something in my hands when I'm watching TV or something. I like crocheting mostly!
This is one of my two ripple blankets.  The ripple is the kind of stitch - it's like a wave.  This one has a weird colour combo - purple and camo blue?!  What was I thinking.  I picked out the colours ages ago, because I only crochet my blankets rarely.  They're nice to come back to after ages! 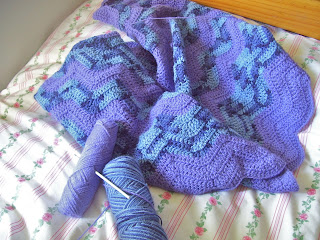 This one is knee-rug sized.  I still have to make it about twice as wide.  That'll take me another year or two at this rate! 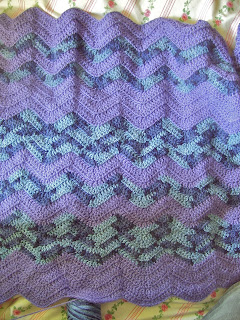 While in Sweden I started knitting a jumper for Charles.  I managed to do the whole torso!  I found the pattern online at GarnStudio.  They have thousands of free knitting patterns online, it's an ad for their yarn.  I saw some of their yarn in Sweden (it's a Swedish company I think) and it was really nice. 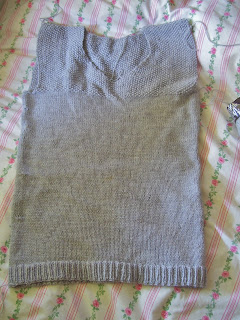 The bottom is ribbed and the top section is moss stitch.  The rest is stocking stitch.  Made on a circular needle!  So now I have to do the sleeves, but they're supposed to be done in the round on double pointed needles.  I find double pointed needles WAY TOO FIDDLY so I'm thinking of just doing it flat and then sewing a seam up the arm.  I also need to do the neckband.
Stuff Doing!  All The Time!
Email Post
Labels: craft crochet knitting