As most of you know, I work in my university's Music Library. 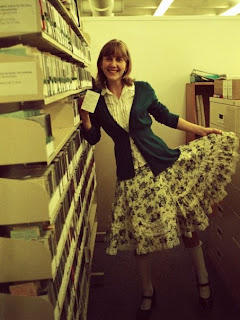 Here's me at the library a couple of years ago.  Shelving some CDs, wearing a skirt!  Photo taken by the wonderful Lisa.

Recently there's been a proposal approved to move the Music Library up into the Art Library space due to financial problems.  Obviously there's a lot of upset over the proposal, because it would be super inconvenient for us music students to walk to the Art Library to get our stuff, and because the new combined library will have to house twice the amount of books and twice the amount of students.  It's simply not going to work.  Anyhow there are lots of reasons why I think it's a bad and shortsighted idea.  I won't go into it here.
We had a fun "study session" protest the other week where all the Music and Art students crammed into the Art Library space to show how crazy it is and how it won't all fit.  We music students all brought big scores to "study".  It soon became clear that it would never work as a library for two sets of students - and that was without all the extra materials in the library itself.   Then people made speeches and there was cheering etc.
Pictures!
Here's my friend Yvonne (of Professors in Dresses) studying a giant score that is more like an ironing board.  She's wearing the original collar - the one I made the replicas of!  And there's my laptop about to get trodden on. 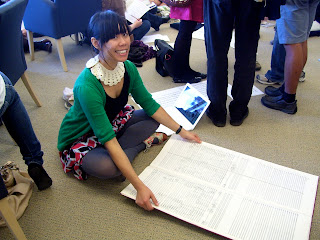 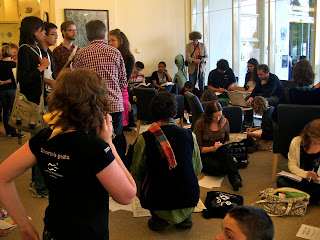 Even more so many people! 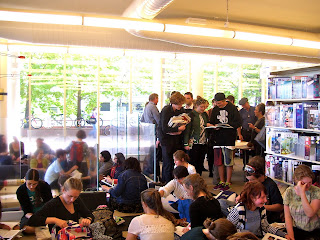 There was a video taken of the protest that has been put up on youtube.
Now the challenge is to keep the protests happening to alert the public to what is going on.   We have a new Vice Chancellor so hopefully he'll disagree with the merge and take steps to keep the libraries separate.  We need to make it clear that SOME THINGS ARE WORTH PAYING FOR.