Haven't updated in a while whoops!

It's going to be a busy month ahead for me!
I'm performing my first recital of my Honours year next Friday the 29th.  It was a bit of a rushed decision to put it so soon, but I realised that next month is going to be amazingly busy with rehearsals and performances for the Canberra International Music Festival and I'd better just get it out of the way.
So!  I'm playing Marimba Concerto no. 2 by Ney Rosauro.  He's a cool dude!  I saw him play that piece in 2009 when he was visiting Sydney (he's from Brazil) and all the Canberra kids trooped up to hang out.  He also was judging the Percussion Eisteddfod which I played in the next day.  He was really nice and interesting - just like his compositions!
I just had a rehearsal with my accompanist (and friend) Ella this morning.  I think it's going to be okay.  But gosh I'm nervous!  And I seem to be getting a cold just in time for the Easter weekend! 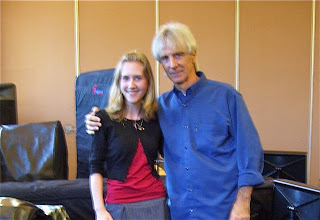 Here's a lovely blurry photo of me and Ney Rosauro at the Percussion Eisteddford in 2009.  See how long his arms are compared to mine?  They're like twice as long as mine.  No wonder he puts so many big intervals in his piece.
I can't believe I've had that skirt for so long.  I need to make a new one.
Email Post
Labels: life music