So last night I went to see Weird Al again...

Weird Al Yankovic was playing at the Royal Theatre last night in Canberra!
It was pretty hot yesterday - 27 celcius. This is what I wore: 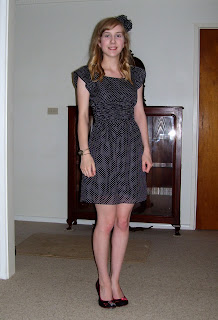 Dress: Camden Town markets,
Shoes: Irregular Choice.
Somehow I found a headband that matched exactly the fabric of my dress.
I printed out two copies of the photo Charles and I took with Al last time and wrote a letter to him on the back.  I wanted to give him one copy and get him to sign the other copy.
This time I went with my friend Kyle instead of Charles (for obvious reasons).  We arrived literally an HOUR early because I was so excited.
Since we were so early, we bought merch before the show.  Kyle bought me Weird Al's new kids book (so now he's an acclaimed author AS WELL) called When I Grow Up.  I bought his Amish Paradise t-shirt because it is awesome.  Kyle bought The Saga Begins t-shirt.  ALSO AWESOME.
Okay so the show started and I was super excited.  It was everything I wanted it to be (apart from him not singing Everything You Know Is Wrong or Melanie) and the costumes were rad, the music was phenomenal, and the video clips in-between songs were hilarious.  Here are links to some of the film clips...
Alanis Morissette - Al's Joyride
Our Friend Dirt - from The Weird Al Show
Madonna interview - They only showed an excerpt of this but the whole thing is funny.
Titanic spoof - Again, only showed an excerpt
"Weird" - SO FUNNY
The encore was "We All Have Cellphones, So Come On, Let's Get Real", and then the REAL encore was The Saga Begins, complete with dancing storm troopers.  It was the stuff!
After the show we hung out in the foyer for about half an hour waiting for him to come and sign stuff.  Yay he did!  I'd been building it up in my mind for so long that I just kind of prattled on and forgot Kyle was there (sorry Kyle..).  I gave him the photo I'd written on and thought that was "really nice" and I asked him to sign the other one so I could send it to Charles in Sweden and he DID, and then I asked if he would sign the storybook for me and he said "of course" and DID, and then I asked if he's going to do shows in America in August and he said no, only in September, and I said I was going to Delaware to do a ragtime xylophone course and he thought that was cool.  Then we got a photo together!  Yays!  Sorry Kyle I guess I completely forgot you were standing next to me.  I was SO EXCITED AND HAPPY.  Then he shook my hand with BOTH of his hands and said "It was really great to see you again!" 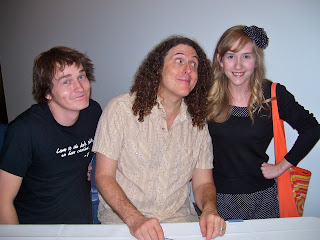 YAYYAYAYAYAY
I giggled all the way to the car and grinned all the way home.  I'm wearing my Amish Paradise t-shirt now!  Now pics of my haul:
T-shirt front: 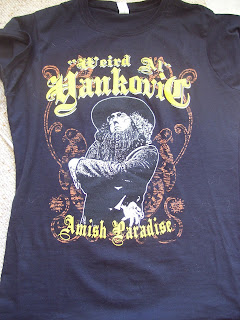 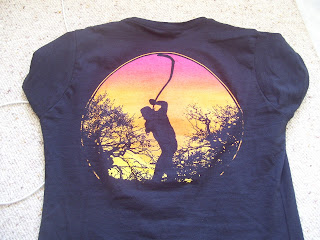 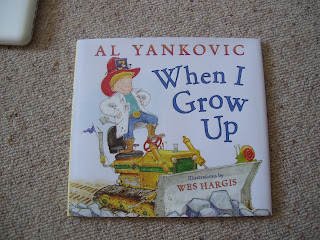 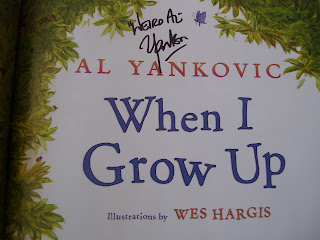 I really like the book!  It's all rhyming and it's about all the cool things this boy wants to do when he grows up!  It makes me feel a little better about the fact that I have no idea what I want to do when I grow up - and I'm a lot older than 8 years old!
Old photo signed! He signed Charles' shirt! 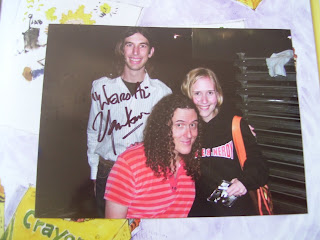