Last night at around 9:30, Charles and I were just chilling out here in Piteå.  Then we suddenly got a text from our friend saying "Aurora!"  We dropped everything and put on coats and walked out.  We could see the aurora faintly from our building, but wanted to see better.  We went to the field outside the university.  Even there was quite bright, but standing in the middle of a snowy field was darker than anywhere else we could think of. 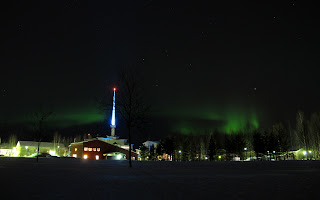 The field is covered in about a metre of snow.  There's a path through the middle that's raised and made of compacted snow.  If you stray even one centimetre off the path, you step into snow up to your bum. 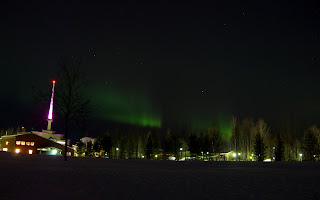 On the way out of the field, we saw another path that would be a shortcut.  Bad choice!  It was super deep snow and NOT a path, and I fell over about 6 times.  Not a shortcut, but pretty fun! The big pole of light is a spire at the concert hall.  It's cute that we got it in the photos - makes the photos very Piteå-y.  A nice romantic evening in the presence of magnetically charged particles!
Email Post
Labels: aurora piteå sweden