So recently, my plans to take over the world have been going very smoothly.  Things have been progressing at a modest but steady pace.
Last weekend I went to Sydney with my brother and sister-in-law to see The Aquabats!  They have been my favourite band for YEARS, like DECADES.  My brother is older than me and I just liked whatever he liked, so I got into the Aquabats when I was like 8 years old.  They were AMAZING and SUPER RAD and I had a great time!  The Aquabats are superheroes from Aquabania!  They wear masks and superhero costumes!  I highly recommend looking them up!  MC Bat Commander (the frontman) said "When you dress like this every day, you start to feel a little weird... because it's just so AWESOME, you feel kinda bad for everyone else!".  Man I love the Aquabats.  Here's me and my brother (I was super enthusiastic and the Sydney humidity + hot venue made my hair go stupid). 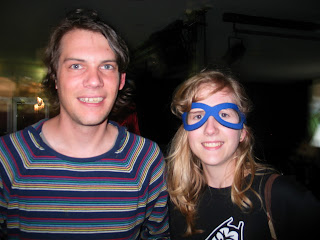 I finished my knitted long johns!  They are truly warm and super great.  They are itchy, but not as bad as I'd thought, and they would easily fit a pair of tights underneath to shield my legs from the scratchy wool.  I ran out of the lovely brown-y wool and couldn't find any more in the shops, so had to improvise with my stash for the last 15cm or so.  They now are brown brown brown brown brown BLUE brown BLUE WHITE BLUE WHITE.  Awesome.
Tomorrow I'm graduating!  I shall have a BMus/BSci(Psych) this time tomorrow.  I do plan to do Honours next year, but my parents wanted me to have a ceremony and retrieve my certificate now because they're worried I'll abandon my degree and flee to Sweden.  That fear is perhaps not JUSTIFIED, but at least valid.
And I leave for Sweden on Tuesday!  I'm almost all packed!  Wow!  The travelling time is like 28 hours, so I won't get there until Wednesday evening (Canberra time).  I'm a bit worried about my flights (freaking out a bit) because I'm so inexperienced at doing stuff like that.  What if I feel sick?  What if I get lost at Bangkok airport?  What if I'm next to a smelly person?  It could be TORTUROUS.  But then I'll be there and it will be awesome!  Seeing Charles again is going to be so ... relaxing.  I feel as though I've been uptight and on the edge since we parted.
Here are some half-frame Diana Mini shots of Perth... only just got them developed and scanned (lazy Chrissy).  Enjoy!  I'll post pics of my long johns soon etc.
This is breakfast AND morning tea. 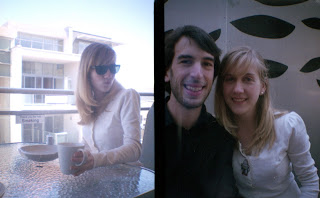 This one looks like a full-frame photo but I swear it isn't!  Train. 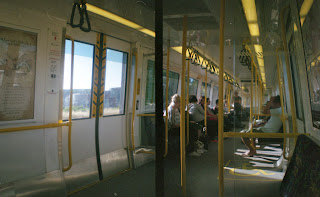 This is at the Perth Botanical Gardens.  I like that I'm a ghost in the second frame. 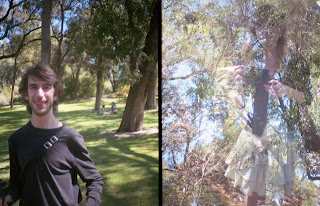 So... turns out that dress is really short?  It didn't seem that short at the time. 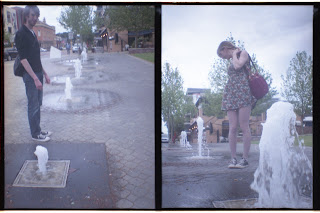 I really liked the ground fountains. 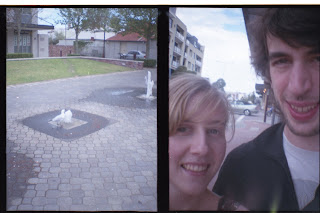 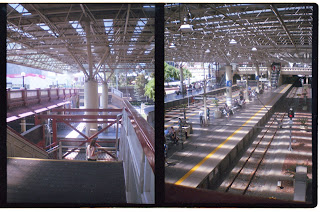