A friend of mine does fashion at CIT and needed models for her assessment.  Of course I put my hand up!  We had a photoshoot yesterday at the Glassworks - an old building that looks cool.  There were three models, three designers and four photographers!
These are the outfits I got to wear.  I originally thought I would only be wearing the main one in the photo, but then at the photoshoot they were all "Ok Chrissy time to get changed into your next dress!" Which turned out to be the mini dress next to it in this photo.  I was slightly uncomfortable because it was so short!  The first outfit I LOVED because the skirt is just gorgeous. 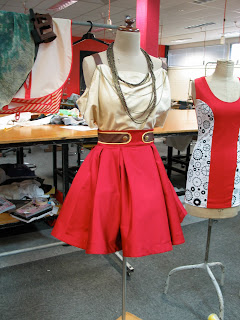 They got a makeup artist in to do our makeup - it was supposed to be light and ethereal around the eyes and dark and intense lips.  I think it worked pretty well!  I have never worn so much makeup.  They also teased my hair and put it up (frig it took ages to comb that out last night). 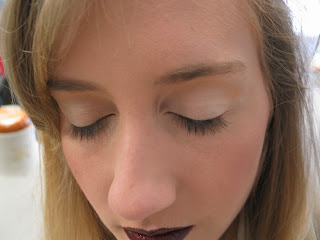 I don't have any photos from the actual shoot, since I was too busy posing.  It was weird but the photographers were really nice and told me what to do.  I got sunburnt on my shoulder, which is weird because the photographers wanted us in the shade most of the time, and it was also partly cloudy yesterday.  When I get sent the photos from the shoot I'll be sure to upload some!  I hope I get to do this stuff more often because it was awesome fun!
We have a fashion parade next Friday that I'm involved in... I hope I don't trip on the catwalk!  That would be hilarious!
In other news, I just ate the best breakfast ever.  WOW.
Museli + raisins + glace cherries + a few choc bits + dried apple + dried apricot + crushed peanuts + milk + yoghurt = delicious.
Email Post
Labels: fashion modelling photo