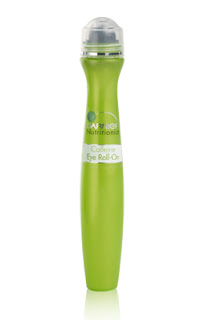 So as we all know, I'm a little sensitive about my eyes. I often have kind of wrinkly, dark circles. So my friend recommended this stuff: Garnier Caffeine Eye Roll-On!

The stuff comes in a little plastic tube with a big silver ball at the top - kind of like a giant ball-point pen. You roll it under your eyes and it claims that it tightens the skin, reduces dark under-eye circles, gets rid of puffiness, and refreshes your skin. Sounds super great! However, it's kind of sticky and you have to make sure it dries properly before applying any makeup - or it'll roll off in gross sticky chunks.
It is a pretty good product, but I have to admit, the reality is only moderately great.
Claim 1: Tightens the skin. I think this is actually true! It leaves a thin film on your skin, which really does seem like it tightens the skin. It could be that it's covering up any wrinkles and making them stay put. This might be enough for some people!
Claim 2: Reduces under-eye circles.
Not at all. My dark circles are as dark as ever! The tightening of the skin might give the illusion of reduced circles, but I don't think it works really. To reduce dark circles I think you probably need bleach!
Claim 3: Gets rid of puffiness. I don't really have puffiness so that doesn't apply to me. Puffiness is what I want. I suspect it would work though, because there's caffeine in it. Or something?
Claim 4: Refreshes the skin. This is true! It feels really nice to put this on! It's super cool the first few seconds and then it starts to feel warm, at least for me. I really like the cold then hot feeling. It is very refreshing for tired eyes.
Do the results last? No. As soon as you wash it off, the skin returns to its previous state. This is okay, I guess. But it does mean that there's no opportunity for real improvement, and that improvements are only as good as the amount of product you put on your eyes. It's just like a prep for makeup, or if you eyes look just a bit lame today.
My friend thinks that maybe different people have dark circles for different reasons - allergies, tiredness, genetics. Mine are because of genetics - my mother and grandmother both have them. So perhaps if your dark circles are because of lack of sleep, or allergies, or something - this product might work better on you than it did on me.
In a couple of weeks I'll review that super expensive stuff I was conned into buying the other day. I've tried it out and it is SO NICE OMG. My face feels so good.
Email Post
Labels: makeup product review