While we were staying in Kyoto recently, I was able to visit Metamorphose, Milk, and Emily Temple Cute. I'm not sure if there are any other ones in Kyoto, but there certainly weren't any more in the downtown area.
First, Metamorphose. This shop can be terribly difficult to find. It's in the Teramachi arcades, which is the main shopping area in Kyoto. It's actually in one of the covered arcades, in Teramachi street. When walking from Shijo-Dori (as normal) it's not far down the road and it's on the left. It's hard to spot because it's on the 5th floor of the building, and there's only a small sign outside on the ground floor. When you walk into the building, you can see their display in a glass case. When the shop is open, there's a dress in the window. 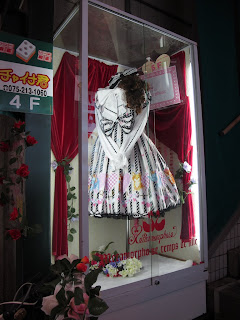 Like so.
Remember, this shop is closed on Tuesdays!
The shop itself is quite small, but is packed full of clothes and shop girls. How do they afford to hire so many shop girls? Isn't there a recession? Anyhow, I found Metamorphose had much nicer stock than last time I was there. Last time there was a thing for vinyl and animal prints, which I didn't like, but this time it was more towards a classic look. The best thing I found there was short socks with lacy tops. I think that the short socks look is adorable. I used to wear those sorts of socks when I was a really little girl. I should have bought them! I didn't! Fail!
Milk and Emily Temple Cute are next to each other. They're not in the covered arcades, but are on a street off the other side of Shijo-dori. They're near a shop called Naniwa Camera which Charles got a kick out of. 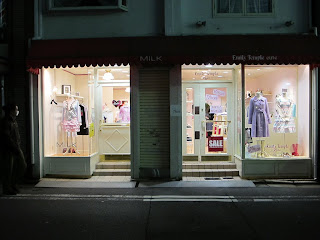 First, Milk. There was so little stock in this shop. I wouldn't really call the style "Lolita" either. But some of their pieces were really beautiful - I tried on a pair of shorts with hearts on them (too big). It's expensive, but there were some things in here that are very cute.
Emily Temple Cute was extremely pleasing. It's really expensive, but good quality stuff. The shop girl could speak some English and had a conversation with me. She was so sweet! Since there was a sale on, some of their stuff was quite cheap. I love their sweet little embroidered cardigans and knit tops (or "cutsews" as they are called - where the heck did that word come from?) more than their dresses, but that's just my taste. The dresses are a bit foody - strawberries and cherries galore. I'm not so keen on wearing food. Their catalogue had some really nice Spring stock coming in, so look out for that! It's really cute. I liked this Kyoto shop a lot more than their other shop in Shinjuku - mainly because the shop girl was so delightful.
I get nervous in these kind of shops and don't get to look properly. I probably could have found something to buy in ETC but I hate handling the stuff they've just neatly folded and hidden the price tag. And it's hard to try stuff on when I'm wearing a thousand coats.
So there you go! Now go visit!
Email Post
Labels: clothing emily temple cute japan lolita metamorphose milk