The "Victorian Maiden" head shop is in an apartment building in the middle of urban Osaka which seems totally weird. They seem to have another apartment in the building which I guess is their office where they run the business, so the shop is their special show room.

I had sent them an email (in Japanese) saying when I would like to visit their shop but they didn't reply which was a bit upsetting. I didn't know whether they expected me or not. We decided to go the shop anyway but the directions on their website was in Japanese and really confusing even after translating. So we went out to the place on the map which was tricky in itself and followed the directionts to the highlighted building, but it didn't seem right. In fact we went up the correct apartment and it just seemed like a normal apartment. Then we went to about 3 other local apartment buildings looking for the right one. Eventually we decided to have a break and get a coffee. In the shop, I was looking at the map and asked the waitress if she knew where to go, she got her manager who knew about it and led Charles outside to point to where to go.

Here are some directions on how to get there for anyone else who would like to go.
Take the JR Tozai line from Osaka station to Osaka-jo Kitazume station. Take exit 2.
Cross the road using the big pedestrian crossing in front of you, go right and walk down the street.

A few blocks later you'll see a coffee shop (called Coffee Kan or something) and a hairdresser next to each other. Turn left at the road after the hairdresser, and then right, so that you're behind the block of flats. Walk a little bit, and you'll see Osaka castle on your left through a vacant lot. There's an apartment block on your right, where there should be a little VM sign on the letterbox. Use the intercom to call room 601, which is where they hang out, and then go up to room 201 which is the shop. There are signs in Japanese telling you this.

When I used the intercom, the girl asked if it was Christina so she did know I was coming. We went up to floor 2 and she came down from floor 6 and opened up.

At the VM shop, there was a small ante-chamber where there was a mannequin and some bits and brochures. The main room had several racks of clothes, two small tables and a display cabinet with beautiful hair things and jewellery and ornaments, a fitting room, and the soundtrack was Easy Piano Duets (a book I know well). Frilly parasols adorned every other place. Everything was old-fashioned and pretty. The shop girl was extremely cute and helpful, although she couldn't speak a word of English. I tried on lots of clothes, many were too big for me. Every time I was interested in a dress she went and got a different colour for me in case I was interested. She was most helpful!

Here is a list of all the clothes I tried on:

Noble Stripe Pintuck Blouse in both brown and blue. It fit like a glove. I didn't like the brown so much, but it was hard to find something nice that went with the blue one. It's made of light semi-silky fabric which is slightly striped.
Tulip Garden Scallops Skirt in the dusky colour. This skirt fit well because it had lacing at the back. It is lined and the fabric feels delightful. I liked this skirt.
Charlotte Mermaid Skirt in black (they didn't seem to have the cream). I really loved this on the website, but in real life it didn't fit me at all. I don't get it, it just looked completely wrong. Too big for me, and so it sat too low on my waist, and so it ruined the hipline.
Christina Dress in black. Everyone knows how much I love this one. The girl got it out for me especially because she realised that it is NAMED AFTER ME. I had high hopes, but it was too big. It should be called the Slightly Bigger Than Christina Dress. The collar was cool though, I would have liked another like that.
Ribbon Mielche Dress in red flowery. It was pretty but a bit overwhelming and too big for me.
Lady Check Mermaid Dress in black and white tartan. It was a totally weird fit. Looked cool on the website!
Reginental Stripe Frill Dress in light grey. This was really beautiful. It fits well and has a nice shape. The fabric is beautiful. I can imagine myself wearing this one to work!
Dorothy Dress in pink. What a lovely dress! It fit well and suited me, and had the look of a collar at the top - all pintucks and lace edgings. Super lovely. I might buy this another time.
Adele Bustier Dress in black patterned. This was really nice, I tried it on twice actually, once with my blouse and once with the VM blouse. It was really pretty and fit perfectly.

In the end I bought the pintuck blouse in blue, and the tulip garden skirt in dusky. They go well together and I'm so happy with them!

I spent a good hour and a half in the shop, because I wanted to be sure about my purchases. When I bought them, the girl also put two postcards and a lovely VM phone strap in the bag too. She told me they were presents and we had a small conversation. Charles told me later that she'd been writing me a postcard every time I was in the changeroom (often) using a little translator which beeped (I had been wondering about the beeping) and she'd asked him which colour phone strap I'd prefer. Then Charles took a photo of her and I together in the part of the shop where photography was allowed. She told me I was cute! The cutest girl in Japan told me I'm cute! I didn't stop smiling all day. 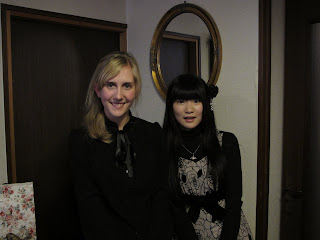 She looks a little bit shocked, but that was nice. 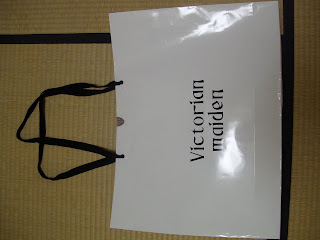 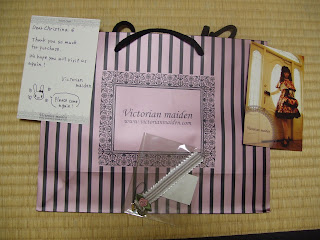 The presents I was given. 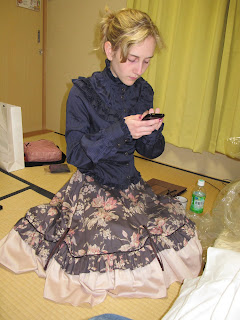 Me playing tower defence on the iphone in our tiny hotel room. I'm a bit messy because I'd just had a shower and it was midnite. 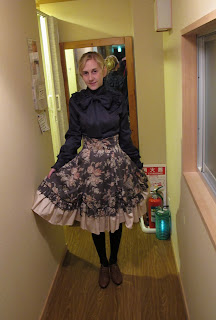 In the hall with my new shoes on. These are just teasers, I'm sure there will be many photos to come.
Email Post
Labels: japan lolita osaka victorian maiden