Today I will add to the ever-growing list of Altoids tin iPod Nano cases that can be found on the internet. With pictures!

So here is a picture of some stuff. Not pictured: drill, felt, sealer, glue, wet and dry sandpaper, scissors. 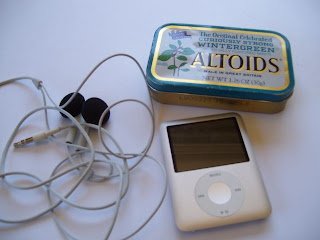 First thing to do is drill a hole in the tin where the headphones cord goes through. Make sure it's in the right place by laying the iPod on top of the tin and drawing a line down with a pencil or something. 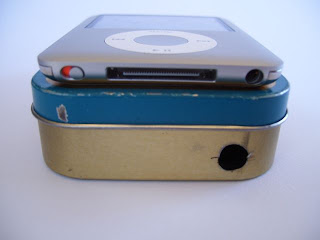 Make sure the hole is big enough for the plug to go through. With larger holes in thin sheet metal, it's a good idea to start with a small hole and get bigger, as sometimes the metal can catch on the drill and spin around. I used a drill press my dad owns, which made things totally easy. Always use a vice! 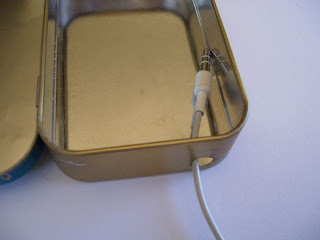 Next I got a tiny piece of wet and dry sandpaper and folded it up small so I could sand out the hole. Drills usually leave bits of metal sticking out the other side. If it's rough, it will damage the headphones cord. This is tricky. 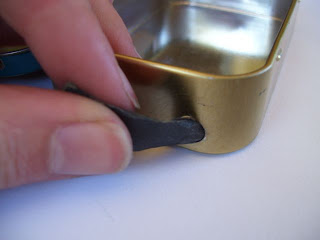 The next few steps are too boring for pictures. I sanded out the inside of the tin lightly, and then applied a sealer so that the glue would stick properly. After it dried, I cut 2 bits of felt for the inside lid and the bottom, and 1 long bit of felt for around the inside walls. This just takes a bit of measuring and guesswork and trimming.

I applied craft glue (the gummy kind) to the felt and stuck it in. First I stuck in the wall piece, then the bottom and top. This makes it look a bit neater somehow. The inside wall piece should begin and end at the headphones hole. Mine was about 3mm too short on one side, but I think that's ok. 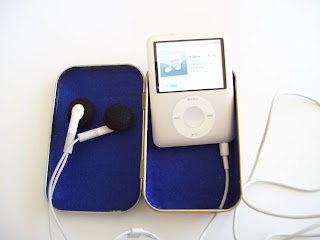 There it is! How cute! The song it's playing is Old Bank by Caxton. I also cut a piece of contrasting felt the same size as the bottom and top pieces, and use it as a layer between the iPod and the headphones when everything's in there. The tin is a great size because the headphones fit snugly on top of the iPod when not in use. 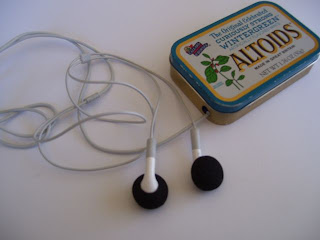 And something a little different...
Here is an altoids case made from an iPod!
Email Post
Labels: altoids tin craft felt ipod case modify